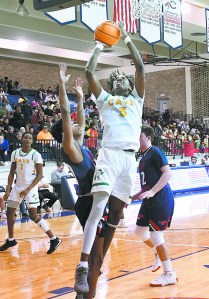 North Rowan trailed 31-16 at the break and fell 65-47 in the Yadkin Valley Conference contest.

Usually high-powered, the Cavaliers (0-3, 0-2) have scored in the 40s in three losses to open a rebuilding season.

Quashawn Carpenter (15 points) and Derrick Hanson (14) led the Cavaliers. Kendrell Goodes got his eight points in the third quarter. Kendal Mitchell made two 3-pointers and scored eight in the fourth quarter.

“Hanson was a bright spot,” Causby said. “He played with the aggressiveness that we have been missing on offense.”

Chatham Central (3-0, 2-0) is ranked 15th in 1A and won earlier this season in double overtime at Salisbury.

North Rowan is home on Friday against Uwharrie Charter.