High school basketball: North girls pull out a tough one 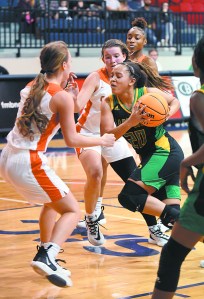 Photo is of North’s Hannah Wilkerson in Christmas tournament action against Carson. Wilkerson had 19 points and 12 rebounds on Tuesday. Photo by Wayne Hinshaw, for the Salisbury Post

BEAR CREEK — North Rowan’s girls encountered their first challenging game of the season on Tuesday, and they experienced it a long way from home.

They got through it.

The Cavaliers stayed undefeated with a 56-48 win at Chatham Central in a Yadkin Valley Conference game that was a lot dicier than it sounds.

“We had a low-scoring first half, but we made quick adjustments that worked for us in the second half,” North head coach Anthia Smith said. “We put things together, had the inside and outside working together. I was impressed with how the girls utilized each other. I was proud of all of them.”

North (3-0, 2-0) was in a scoring drought and was down by three when Kamora Cannie drilled a long 3-pointer from in front of the North bench. That shot turned the tide.

With the score even at 46-all, North freshman Brittany Ellis made a long jumper, but had a toe on the 3-point line.

Chatham Central’s Bears tied it at 48-all, but a free throw by Hannah Wilkerson put the Cavaliers ahead to stay.

Chatham Central’s girls (0-2, 0-1) were playing for the first time since being crushed in the Salisbury gym by a 25-0 run by the powerful Hornets. Not surprisingly, the Bears stayed calmer and shot better in their home gym against North.

It’s true that all road wins are good ones. Especially when those road trips are 84 miles each way.

The Cavaliers will take it.

Wilkerson, a junior who is closing in on 1,000 career points, had 19 points, 12 rebounds, five blocks and two assists. Her career total is now 959 points.

North is scheduled to play Uwharrie Charter at home on Friday.