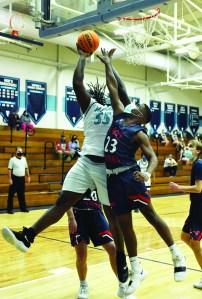 The Mustangs (3-2, 2-1) ended years of futility and frustration against South Iredell on Tuesday, winning the North Piedmont Conference contest 62-53.

South Iredell isn’t as talented as it has been in recent years, but East is happy to get the win. East was 0-7 against South Iredell the past three seasons, including the loss that brought the 2-23 2019-20 season to a halt in the NPC tourney.

East got it done with two-point field goals, shooting 64 percent from the field. East made just one 3-pointer, although it was a huge one by Dylan Valley. East was good enough at the foul line to hold on to a lead, making 15-for-23.

Vincent Jones had a great night with eight rebounds and 17 points on 7-for-10 shooting. David Jordan scored an efficient 16, shooting 6-for-9. Jordan also had eight rebounds.

Cameron Padgett got 13 points on 5-for-9 shooting.

It was back and forth in the latter stages of the third quarter and early in the fourth. With East trying to hang on to a 45-44 lead with under four minutes remaining, Valley pulled up for a transition 3-pointer from the left wing and made it. That gave the Mustangs some separation.

Padgett worked for key free throws, and Jordan made a driving banker with 1:30 left to put the Mustangs ahead 54-49.

Jones and Pinckney stepped to the line late in the game and made enough free throws to allow East to ease away to the final margin.

East is home against Statesville on Friday.