My Turn, David Post: Trump is no Grover Cleveland

In the 1988 vice presidential debate, Republican Dan Quayle, who was 41 years old, compared himself to President Kennedy. His Democrat challenger, Lloyd Bentsen, was prepared and famously responded, “Senator, you’re no Jack Kennedy.”

President Trump, you are no Grover Cleveland. 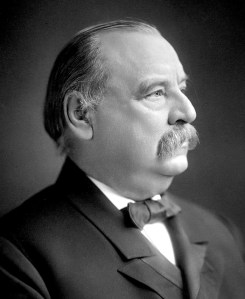 During the second half of the 19th century, Republican and Democrat political philosophies were flipped, as we know them today. Democrats were conservative, states rights advocates, and Republicans were progressive, strong federal government advocates. Over Democratic opposition, Republican President Abraham Lincoln freed the slaves and congressional Republicans passed the 13th, 14th and 15th Amendments abolishing slavery, establishing equal protection and granting former slaves the right to vote.

On her way out of the White House, First Lady Frances Cleveland told the staff, “Take care of all the furniture and ornaments in the house, for I want to find everything just as it is now when we come back again.” Asked when she would return, she replied, “Four years from today.”

Four years later in 1892, Grover Cleveland was reelected president and returned to the White House.

History has a way of repeating itself, at least, in part.

Cleveland was pro-business, though he opposed federal support for farmers, business and veterans. Like today’s Republicans pre-Trump, Cleveland opposed high tariffs. He campaigned on political reform and fiscal conservatism. (Don’t forget that Trump promised to balance the budget “very quickly.”)

Claiming that Cleveland’s opponent was untrustworthy and fraudulent, the so-called Mugwumps left the Republicans and supported Cleveland. (That sounds like today’s anti-Trump Lincoln Project, more concerned with morality than with party.)

Late in the campaign, a Republican preacher denounced Democrats in a way that insulted Irish Catholics, who rebelled by voting for Cleveland. It has echoes of Hillary’s untrustworthy emails and her “deplorable” comment about Trump supporters pushing those voters not toward her, but away from her. Both events, late into the campaigns, pushed those insulted voters into the waiting arms of Cleveland then and to Trump in 2016.

Parallels of history, however, are never perfect. Cleveland faced a divided Congress and knew he was the outsider. So, he reached out to Republicans wanting to work together and find common ground.

Cleveland was known for his honesty and integrity. Cleveland faced a divided Congress; the House was controlled by his Democrats, but Republicans held the Senate. He avoided patronage, made appointments based on merit and retained a number of Republicans who, he said, were doing a good job. But facing a Republican Senate, he issued more vetoes than any president before him.

Cleveland thought reconstruction was a failure and was reluctant to enforce the 15th Amendment that granted voting rights to former slaves.

Cleveland was the first incumbent to lose a re-election bid in 48 years, but he carried out his duties as president until inauguration day.

Four years later, Cleveland jumped back into the race for the presidency, won the popular vote for the third time and the Electoral College for the second time.

Cleveland is the only president to win a second term after having lost a term. He was the only Democrat to win between 1956 and 1912 because he was able to build coalitions from both political parties. When he died, his last words were, “I have tried so hard to do right.”

Donald Trump, you are no Grover Cleveland.

David Post is a member of the Salisbury City Council, a businessman and an attorney.