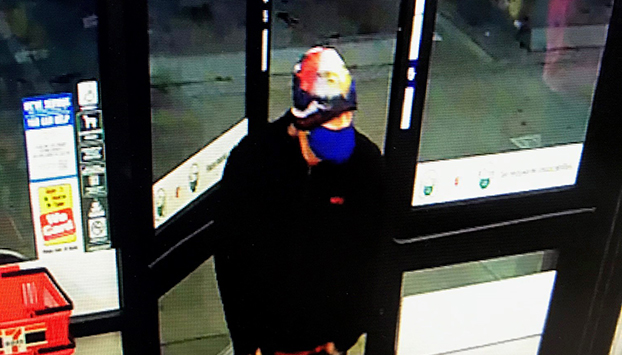 This image, provided by Salisbury Police, shows a man suspected of robbing a 7-Eleven convenience store on Innes Street around midnight Tuesday.

SALISBURY — Police are looking to identify a Salisbury man after he robbed a gas station on Innes Street.

The unidentified man, who was described as being in his early 30s, displayed a black pistol when he robbed a 7-Eleven convenience store at 1605 East Innes St., police said. He was wearing a black sweatshirt, dark jeans, a blue mask and a knit cap that pictures a bald eagle and an American flag.

He arrived at the front counter of the convenience store around midnight on Tuesday and was allowed to the front of the line by a couple who was already in line.

Police said the phone rang when the man approached the counter, and the clerk who was working turned answered it and then returned to the man, who asked for a pack of Newport red shorts cigarettes.

The clerk turned around to retrieve the cigarettes and found a black handgun pointed in her direction on the counter when returning to the man.

The man asked for the money in the register, and he received about $150.

People with information about the crime can contact Salisbury Police at 704-638-5333 or call Salisbury-Rowan Crime Stoppers at 1-866-639-5245. Tips may be submitted online at tips.salisburyrowancrimestoppers.org, via Facebook private message or via the Nixle app by texting 888777 with the words: TIP MYSALISBURY (your tip information).