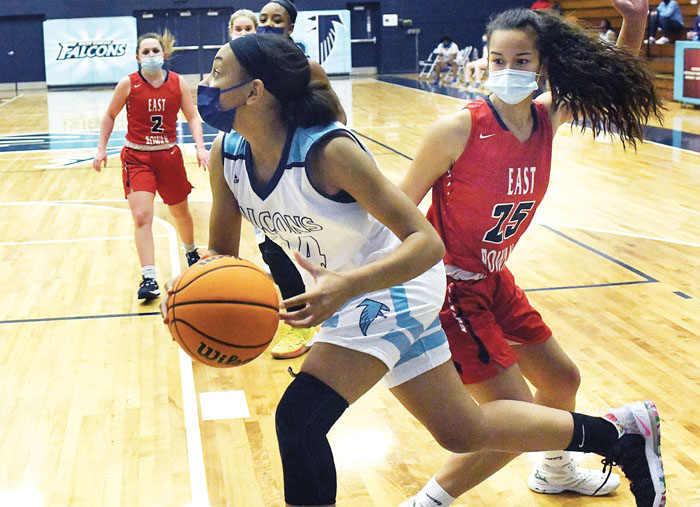 Eleventh in a series of reports on local basketball teams.

Playoffs: Lost in first round to Watauga

MOUNT ULLA — Before we say goodbye to them for good, how good were West Rowan’s girls last season?

West was 17-2 at its peak last season. Five senior starters were anchored by Abigail Wilson, a high percentage-shooting UNC Asheville signee. Those five seniors totaled 4,303 career points, with Wilson accounting for more than half of them.

West was methodical last season, not fast, but big and experienced and making enough 3-pointers to keep teams from clogging the paint with four or five defenders.

It’s possible no roster in county history has undergone as complete a makeover as the Falcons have for this season.

Not just the names have changed, but the style and the pace.

But the tradeoff is speed. West has a lot more quickness and bounce. This is a West team that can go from defense to offense in a terrible hurry. This is a team where just about anyone can grab a defensive board and go coast to coast. Sure, they’re going to throw it off the wall a few times, but they’re going to keep the pressure coming.

“It’s definitely a different makeup for us,” Poole said. “We don’t have Abigail to play through and we don’t have as much 3-point shooting as we had last season. We’re relying a lot on freshmen, and there’s a tremendous jump in playing in middle school to playing in high school. Not just the game speed, but the physicality of it. There are going to be some nights that we’ll put down as learning experiences. We’ll probably take some lumps.”

But the fourth game was eye-catching. On Friday, West went through some zany ups and downs, but won at South Iredell. What’s notable about that is that’s a gym the Falcons’ seniors lost in last season.

So maybe West is going to dish out more lumps than it takes.

It’s hard to see West having major success against senior-heavy Carson, but second place in the North Piedmont Conference looks like a reasonable goal. Second place after graduating all five starters would be something to crow about. And for three seasons after this one, assuming everyone stays together, the Falcons should keep getting better and better.

There are some varsity reserves back from last season. Poole is grateful for them. Every little bit of experience helps. DeDe Cuthbertson scored 48 points in 2019-20. Dreamah Mason scored 30. Sarah Durham scored 19.

Cuthbertson, a sophomore guard, can handle the ball and attack the rim.

Mason, the only senior on the squad, plays mostly on the inside for an undersized team.

Durham is a scrapper. Poole said that “she gets after it.”

Up from the jayvees are Shykira Wiggins, a good rebounder, and Janna Wheeler, a good shooter. Karsen Simpson missed the early games, but Poole says her shooting will be helpful. Melani McDonald provides some depth at guard.

Arnold scored 21 in the win at South Iredell. She’s a good shooter, but what she does best is hit the offensive glass. She’s a quick jumper.

“She’s really good at getting the rebound and going right back up with it,” Poole said.

Tenor is known mostly for her defense, but she’s also scored steadily in the early games.

Edwards is another girl who is being asked to battle taller opponents in the post.

Phifer, a point guard, has a chance to be special. She’s quick and fast and can push the ball right past retreating defenses. She’s been a consistent double-figure scorer in the early going.

“She’s long and athletic and she reminds me a lot of Khaila Hall, who was a great player for us,” Poole said.

That’s high praise. Hall was a Rowan County Athlete of the Year.

Clarke, who is about 6 feet tall, impacted West volleyball as a freshman. So, she got a late start with basketball, But she’s been all over the place: blocking shots, running the floor, scoring and rebounding. With a little seasoning, she should be a dynamic player. Her father, Ken, was a Rowan County Player of the Year. Her mother, Elizabeth, used to be West’s head softball coach.

West has had games in which 10 different players scored. At the very least, this transition season should be a winning season.

“We know there are going to be bumps in the road,” Poole said. “But this group of kids is eager to learn. If they pick up on a few things, they’ll surprise some people.”