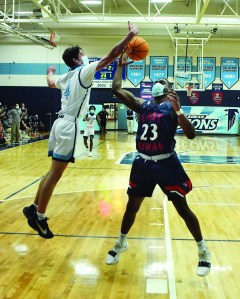 Braden Graham and his West Rowan teammates are scheduled to host North Iredellon Tuesday in a big NPC matchup. West is 4-0.  Photo by Wayne Hinshaw, for the Salisbury Post

Lots of basketball is scheduled for Tuesday, although the fan base is still very limited.

The scheduled boys headliner is North Iredell at West Rowan.

West’s boys are off to a 4-0 start and own two league wins. North Iredell might provide the biggest obstacle to a North Piedmont Conference championship.

North Hills (0-8) will be hosting one of the nation’s top prospects tonight as Lake Norman Christian (11-4) and star shooting guard Mikey Williams are scheduled to visit.

Salisbury lost by one point to a 4A power, but is still unbeaten in the CCC.

Catawba’s women hope to return to action on Saturday at Lincoln Memorial. Catawba’s men hope to play at home against Mars Hill on Jan. 30.

Egypt Alexander (West Rowan) scored 15 points for Greensboro in a loss to Meredith on Sunday.

The Central Carolina Conference championships  are scheduled for Jan. 27 at the Kernersville YMCA.

Salisbury senior Christian Morgan placed second in the 55 hurdles in the Virginia Showcase 2021 held in Virginia Beach. Morgan was clocked in 8.33 seconds.

David Huneycutt had closest to the pin.

The second-place team was made up of Don Carpenter and Pam & Ralph Carver.

App State’s Zac Thomas and Shemar Jean-Charles put their skills to productive use Sunday in the FBS All Americans Tropical Bowl near Orlando, Fla.

Thomas, who went 32-6 as App State’s starting quarterback, led the National team to a 20-17 victory and was named  Offensive MVP. He threw a TD pass and unofficially accounted for 170 yards of offense, with an 8.4-yards-per-carry average.

Rowan Little League spring baseball, softball and T-Ball registrations are being held at Godley’s Garden Center on Statesville Boulevard on Jan. 23, Jan. 30 and Feb. 6 from 9 to 3.

Masks are required. One parent only.  Parents can also register online anytime at http://www.rowanlittleleague.com.

Cost is $90 for all softball and baseball leagues. Leagues are available for ages 4 to 16.