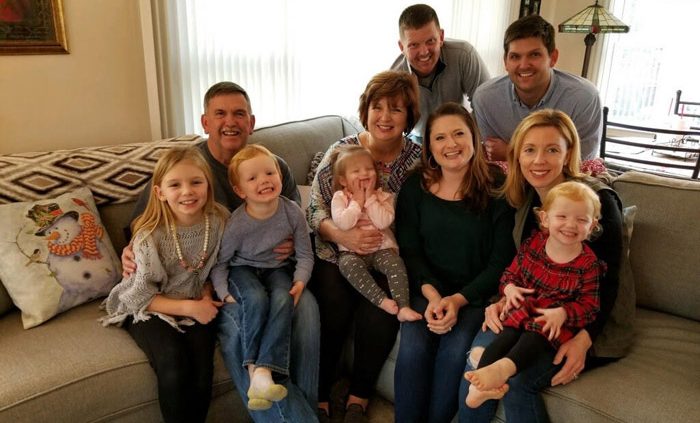 In 2020, Jeanie Moore wrote her memoirs for her family, which includes husband Jack and their two sons, two daughters-in-law, and four grandchildren. Submitted photo

SALISBURY — During the great pandemic of 2020, a lot of folks turned to creative endeavors. Some people painted, some wrote songs, some wrote poetry, some baked. Jeanie Moore wrote a book.

“When I was recovering from knee surgery in mid-February, I realized I wasn’t going to get out,” Jeanie says, “and I decided to keep burning my Christmas lights. The lights change colors, so I’d do a Facebook post on different days to commemorate local groups.”

Blue for law enforcement, red for firefighters, pink for nurses, and so on.

“It evolved into my stories and memories, and people liked it,” says Jeanie, 68. “It resonated with people. I did a post about my mother, and a cousin gave me a picture of my mother. It just opened the doors for connections in ways that made me feel good.”

She decided to publish a book for her children and grandchildren. I had the honor as serving as her editor — nudging her along when necessary — so that she could have the project, which she entitled “Quarantine Diaries — My memories and musings,” completed by Christmas 2020, her original goal.

“I’m glad I did it,” she says. “I have a foundation of stories for my family.”

But the posts haven’t stopped.

When random thoughts popped into her head, she wrote them down.

“It was being driven by a force greater than me,” she says. “It just flowed.”

“There were about four times when I went to post something and it completely disappeared and I had to start over,” Jeanie says. “But actually, it ended up better.”

She adds, “The emotional connection was really important to my mental health and my spiritual health. It showed me how you could be connected without physically being together.”

That’s helped her in her new position as interim vice president for student services at Mitchell Community College, a six-month term she started Jan. 1.

Cheering her on from the start has been her husband, Jack, also 68. Retired from Southern Bell, Jack is the owner of Blowin’ Smoke. He sells barbecue sauce, dry rubs and other products. Jeanie retired as vice president for advancement and continuing education after 36 years with Rowan-Cabarrus Community College.

Their sons, Sandy and Daniel, have also been supportive of their mom’s project. Sandy and his wife, Kyndall, live in Charlotte and are the parents of Blair, who turns 4 next month. Daniel and his wife, Sara, live in Raleigh, and have three children, Reeves, 9, Tyler, 7, and Grey, 4.

Daniel says he’s flipped through the book — but with three children at home and his two older children doing school remotely, he’s been a little busy.

“The last 10 months have been unprecedented, and this has been a great thing for my mom to do,” he says. “She has documented thoughts and memories that often get lost from generation to generation. Mom has been an avid reader as far back as I can remember, so writing and publishing is a big deal for her. She’s retired, but staying active. You can continue to do things well into retirement, and live out dreams you’ve had your whole life. I’m happy she’s found this.”

“What I’ve seen is really good,” she says. “I found all the pictures of me. I liked them all. They’re all my favorites. It was really cool to find out what Jack and Gigi had been when they were younger. I didn’t know any of it.”

Sandy read the book cover-to-cover when he and his family were at the beach with Jack and Jeanie at Thanksgiving.

“I thought it was great,” he says. “It’s a way for her to express herself. Everybody, throughout this whole mess, has been looking for a way to connect. Routine is important to me, and it’s been nice to see her posts regularly.”

Sandy hopes that Blair will someday appreciate her grandmother’s efforts.

“If I had something to that detail from my grandparents, it would be something I would treasure,” he says.

So far, Jeanie has sold about 40 copies, and given another 20 as gifts to family and close friends.

Friends have told her the book has been a nice diversion from the pandemic, and has brought up memories of better days.

While they were at the beach, Sandy and Jeanie were talking about a title for a possible sequel. Jeanie said, “What about More Moore Stories?”

Along with being available on Jack’s Web site, “Quarantine Diaries” can be purchased at the Meals on Wheels office, 1307 Salisbury Ave., Spencer; Fuller’s Market, 112 S. Main St., Salisbury; and directly from Jeanie. Jack’s website is www.
blowinsmokebbqsauce.com. Find Jeanie’s book under the “all products” tab. Price is $16, with an additional $4 if you need it shipped.