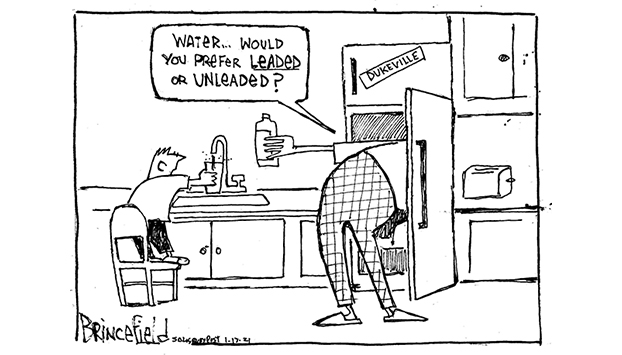 Editorial cartoon by Mark Brincefield, for the Salisbury Post

Just when one crisis seemed to dip below the horizon, a new one has appeared for people living in the northern Rowan community known as Dukeville.

County government has identified four homes with lead in their water and officials are concerned there may be others. Unlike worries about coal ash contamination that plagued the community until municipal water lines were installed in 2018, there’s no scientific debate to be had.

There’s no argument about what levels of hexavalent chromium or vanadium is acceptable in water or whether the chemicals are naturally present in the soil at levels that would cause concern in testing. And there’s no debate about which directions groundwater is moving.

The Environmental Protection Agency says the acceptable level of lead in water is zero because it can be harmful to humans even at low levels. Particularly for children and infants, it can produce learning disabilities, impaired hearing, a shorter stature and nerve system damage, the EPA says. For pregnant women, it can result in reduced fetus growth rates and premature birth. Lead exposure in adults can be harmful in a number of ways, including blood pressure and hypertension, decreased kidney function and reproductive problems.

That’s why the roughly 162 people who are connected to the county’s water line must heed advice to test their water for lead. The line was initially conceived as a way to boost economic development, but it became a way to remedy coal ash concerns, too. Now, it’s unclear how many people on that line may be drinking water with dangerous levels of lead in it.

County leaders and Salisbury-Rowan Utilities, which manages the water line, believe piping in homes connected to the line are to blame. The water line was built just a few years ago and does not contain lead, but homes in the Dukeville area may be old enough to have been built with lead pipes. The EPA says lead pipes are more likely to be found in older cities and homes built before 1986. Among homes without lead service lines, the most common problem is brass or chrome-plated brass faucets and plumbing with lead solder, the EPA says.

It’s OK to bathe or shower in water containing lead.

One question Dukeville residents might offer is whether water contained dangerous levels of lead prior to the water line’s construction. The answer: it’s possible. Salisbury-Rowan Utilities Director Jim Behmer said the chemicals used to treat water that comes from the Yadkin River and ends up in water pipes may have reacted with in-house pipping in a way that released lead into water. A study is ongoing at Virginia Tech now, county officials say, to determine exactly that.

Meanwhile, Rowan County commissioners and county staff are taking steps to provide testing and water filters to customers who might be affected. Not considering mail delays, a pitcher with a filter should arrive at homes no later than Feb. 15. A testing kit is also on the way to homes, which will receive a bill credit for completing the test and sending it back.

If you live in Dukeville, test your water for your own safety and so that the county knows how widespread the problem is.

As for a permanent fix, county officials have four options — one of which they’re moving forward with now because of penalties it could face if a remedy isn’t in place by June 12. But county officials have expressed skepticism about that solution, a chemical booster station, and if it will fix the problem. Salisbury-Rowan Utilities could alter the systemwide chemical treatment formula, but that has much larger implications for tens of thousands of customers in Salisbury and Rowan County. A sure-fire solution would be to replace all in-home piping for customers with lead in their water, but County Manager Aaron Church says that’s not an officially prescribed solution by state or federal officials. So, Church says, he’s not sure whether that would be OK. The cost of such an endeavor would be manageable, he said.