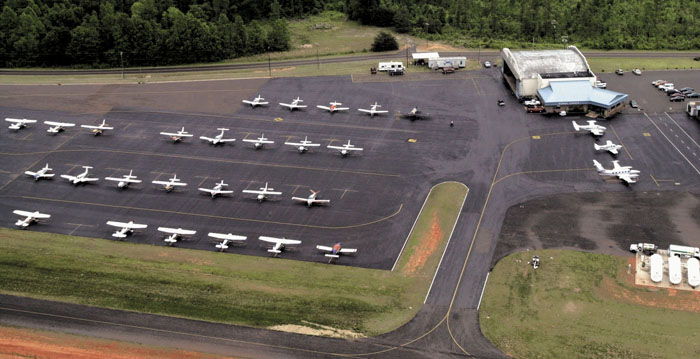 SALISBURY — The Mid-Carolina Regional Airport may not be the biggest airport in the state or in the top tier, but a recent report shows the impact it has on Rowan County is substantial.

Released earlier this week by the North Carolina Department of Transportation, the North Carolina: State of Aviation report found that the county-owned airport contributed $145.97 million to Rowan County’s economy in 2019.

That’s a 2.7% increase from the roughly $142 million the airport contributed to the county’s economy the last time the biennial report was released in 2017, according to airport director Valerie Steele. The report also found that the Mid-Carolina Regional Airport (formally known as the Rowan County Airport) supports 850 total jobs, a 7% increase from the 2017 report.

“The numbers, especially seeing them increase, it yields that the airport is an asset,” Steele said. “It provides factual evidence to show that.”

The report also found that the airport generated $43.24 million in personal income and $5.15 million in state and local taxes.

Steele, who was hired as airport director in late 2019, said she expects those numbers to increase when the next version of the report is released in 2021 — despite the COVID-19 pandemic.

“Even with COVID-19, I don’t expect our numbers to change that much,” Steele said. “I don’t expect them to go down. I’m optimistic for 2021, especially with general aviation and private pilots not being impacted quite the same way as commercial aviation. My hope is that we see an increase in general aviation because of some of the issues people don’t want to deal with flying commercially.”

Steele attributes the airport’s recent growth to the mix of services it offers. Although the Mid-Carolina Regional Airport is considered a general aviation facility, as opposed to a commercial airport like the Charlotte-Douglas International, the airport boasts many advantages.

Along with Piedmont Skydiving and the Mid-Carolina Aviation flight academy, the airport serves as a corporate transportation hub for local companies like Food Lion.

Through those services combined, the airport in 2019 saw 51,000 operations, which is essentially anytime an aircraft takes off or lands. That equates to about 140 operations per day, Steele said. The airport is home to 91 aircrafts, not including the 13 Black Hawk helicopters housed at the facility by the National Guard.

Of the 72 publicly owned airports in the state, the Mid-Carolina Regional Airport is the only general aviation airport that is home to a National Guard post, which contributes 67 jobs to the airport’s total.

The Mid-Carolina Regional Airport, Rowan County Chairman Greg Edds said, is a major asset when it comes to economic development.

“All the things we’re looking for, investment, employment, tax revenue, amenities that a community offers, all these things are there,” Edds said. “It pays for itself over and over.”

Edds pointed out that the airport’s economic impact extends past the runway.

“We’ve got a lot of folks that are flying in around the world to Rowan County to do business here,” Edds said. “They’re purchasing fuel, staying at our hotels, eating at our restaurants.”

The Rowan County Board of Commissioners recently approved the construction phase of a project to upgrade the glideslope system on the airport’s runway. The project was originally authorized in 2018 by the North Carolina Department of Transportation and will be funded through a $486,000 grant from the NCDOT with a $54,000 county match.

A glideslope is a component of the airport’s instrument landing system that ensures safe landings during times of low visibility, like stormy or cloudy days.

“Without it, we could only have visual flights, so it would limit our numbers of aircraft and fly-in days because there are certain weather minimums,” Steele said.

Steele said that the glideslope upgrade will likely take place within the next six months and will position the Mid-Carolina Regional Airport for more growth.

More information about the Mid-Carolina Regional Airport can be found at www.rowancountync.gov/149/Airport.