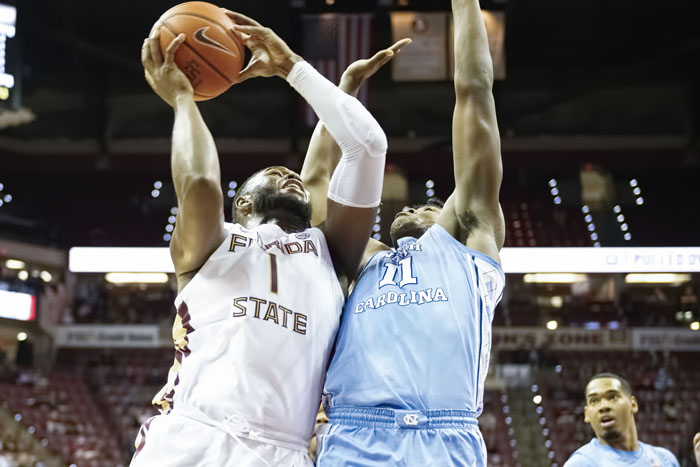 Walker, who made 4 of 5 shots from the arc, missed three minutes of the second half after turning an ankle but returned to hit his final 3-pointer with 11 1/2 minutes left to give the Seminoles (7-2, 3-1 Atlantic Coast Conference) a 10-point lead.

The Tar Heels (8-5, 3-3) were within a point with just over two minutes remaining but missed their next three shots and had a turnover while Gray converted a three-point play and two free throws and the Seminoles went up seven with 16 seconds remaining.

RayQuan Evans, Balsa Koprivica and Malik Osborne added 10 points each for the Seminoles, who were 8 of 16 on 3-point attempts and made 26 of 27 free throws. The Seminoles were without third-leading scorer Scottie Barnes, who turned his ankle in Wednesday’s win over North Carolina State.

Guard Anthony Harris, out since December 2019 while recovering from a knee injury, played nine minutes in the second half and scored five points with three assists.

The Tar Heels had a three-game win streak snapped.

CHARLOTTE (AP) — Brice Williams had a career-high 22 points as Charlotte got past UAB.

The 49ers leveled the season series against the Blazers with the win. UAB defeated Charlotte 61-37 on Friday.

MOBILE, Ala. (AP) — Adrian Delph had a career-high 28 points as the Mountaineers beat South Alabama.

The Mountaineers leveled the season series against the Jaguars with the win. South Alabama defeated Appalachian State 73-64 on Friday.

Christian Guess had 16 points and eight rebounds for the Bulldogs (5-7, 1-4), who have now lost four games in a row. Richardson Maitre added 12 points. A.J. Staton-McCray had 10 points.

It was the first time this season North Carolina A&T scored at least 100 points.

The Aggies hit season highs in forced turnovers (35) and steals (22).

Stephon Augusta had 10 points for the Cougars, who have now lost 18 games in a row. Antwon Ferrell added nine rebounds.

Kellan Grady, who led the Wildcats in scoring entering the matchup with 18 points per game, scored just four on 2-of-11 shooting. Scott Spencer had 12 points for the Explorers (5-8, 2-4).