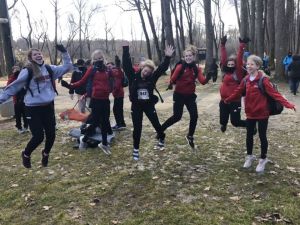 South Rowan girls jump for joy after qualifying for the state meet.

DOBSON — It couldn’t have been much closer. Fortunately for South Rowan’s girls cross country team, it’s a squad that couldn’t be much closer.

The Raiders banded together through some adversity. Now they’re headed to the state championships.

“We had an inspirational performance from a lot of girls on Saturday,” coach Rebekah Julian said. “Tears of pain on Friday. Tears of joy on Saturday. Roller coaster of emotions.”

Normally at least four teams move on to the state championships from each region, but COVID adjustments have reduced the magic number to three for 2021.

When the five scorers deadlock, the tiebreaker is the sixth runner, and due to challenging circumstances, South’s sixth on Saturday normally may have been the eighth. Freshman Blythe Elliot was that sixth runner. She placed 51st. North Davidson’s sixth runner was 55th. So the Raiders advanced. It was that tight.

“It just shows that you can’t ever give up,” Julian said. “Even if you’re not going to be one of the top five, you never know. You’ve got to keep going.”

South’s girls got the news on Friday evening that Macy Miller, usually their No. 5 runner, was going into COVID quarantine and wouldn’t be able to run in the regional. South already knew it wouldn’t have injured Anahi Reta who had come through with a big outing in the Central Carolina Conference Championships.

So eight Raiders were reduced to six.

There were a lot of PRs on a cold, windy Saturday on a difficult course.

Rymer didn’t run her fastest (22:46), but she finished 10th and made all-region. Freshman teammate Madison Beaver stayed right behind her in 11th. Lindsey Beaver, Madison’s twin sister, was 32nd, running a minute faster than she had at Fisher River Park in the fall. Sophomore Mackenzie Chabala, who had played basketball for the Raiders on Thursday and Friday, was 36th.

“We’ve worked hard to share athletes with other sports,” Julian said. “We’ve never had this much sports overlap before, but everyone’s been in it together.”

Sophomore Audrey Weaver was 47th and was the fifth Raider runner.  Elliot wasn’t far behind her.

“A lot of girls really came through with great races,” Julian said. “I knew it was going to be down to the wire.”

Julian said Miller is expected to be back with the team for the state championships, which will be at Ivey Redmon Park in Kernersville next weekend.

The Raiders finished behind West Stanly and West Stokes.

South’s girls made a major jump. They were 11th in regional competition in November 2019.

“It was cold, about the same temperature when we ran today at 12:30 as it was last year when we ran here at 8 a.m.,” South coach Scott Julian said. “There were a few snow flurries out there for the runners.”

The Raiders qualified as a team for the state championships for the second straight season.

South broke through in the fall of 2019 with a third-place finish at Fisher River Park during a normal cross country season. This one has been anything but normal, but the Raiders will return to Ivey Redmon Park in Kernersville for the state championship competition (Jan. 22-23).

This is the culmination of a season that started for South back in June when the Raiders were still preparing for fall sports. They’ve just kept running wherever and whenever they’ve been allowed to. It’s essentially been a remarkable, 200-day season.

The long season has taken a toll on Miller, who has been battling shin splints. But Jones had a step-up sort of day.

South graduated two strong runners from its top five in 2019, but was able to replace them with a strong freshman class.

“Our guys were really good today,” Julian said. “And everyone was just blown away by what our girls team did. We couldn’t be more excited about the program.”

Atkins won with a score of 29. South’s score was 56. Oak Grove placed third.

Competing as an individual, Salisbury junior Sutton Webb was seventh in 22:32 and qualified for the state championship meet.

Webb just missed making the state meet as an individual in 2019.

Sophomore Makayla Borst finished 21st in 21:05 to lead the Cougars. Under normal circumstances, she would have qualified for the state meet as an individual, but COVID has reduced the number of individuals advancing as well as the number of teams.

Regional champ Watauga and runner-up Asheville furnished most of the top runners.

East Rowan’s Meredith Bonner competed as an individual and was 31st in 21:54.

East Rowan’s NPC champion boys were seventh in the regional. Carson was 10th in the team scoring, while West Rowan was 13th.

North Iredell’s Philip Riddle was seventh in 16:40 and was an individual state qualifier.

Gray Stone placed third in the team scoring behind Pine Lake Prep and Community School of Davidson to qualify for the state championships.

Five of the top six for Gray Stone are freshmen.

Gray Stone’s boys were eighth in the team scoring.