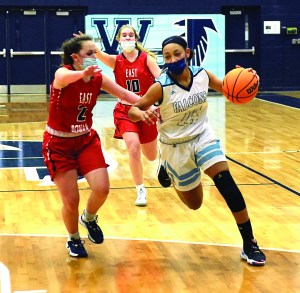 West freshman Lauren Arnold on a drive against East Rowan. Photo by Wayne Hinshaw, for the Salisbury Post.

TROUTMAN — West Rowan’s young girls aren’t driving cars yet, but they may drive a few coaches crazy this basketball season.

It was a wild ride for the mostly freshmen Falcons on Friday. South Iredell is the best team they’ve played so far and they were on the road, but they stayed with it and pulled out a 67-61 victory.

After a back and forth first quarter, West put up 21 in the second quarter for a 36-25 lead and appeared to be in control.

Control didn’t last long. West missed a flurry of hurried shots and was outscored 16-3 in an ugly stretch in the third quarter. The Falcons lost that double-digit lead and fell behind.

Freshman Emma Clark had a defensive board and a coast-to-coast drive to put West back on top, and freshman De’Mya Phifer had a three-point play.

It was 45-all heading to the fourth. Another Phifer drive and an offensive-rebound bucket by freshman Lauren Arnold finally gave West a little breathing room and allowed Poole to relax.

“We showed some of our inexperience tonight,” Poole said. “But we’re working on it.”

Arnold is tough on the offensive board and had 21 points. Phifer got most of her 12 when the Falcons really needed them. Clarke scored 10.

South Iredell had nipped Statesville in its first outing.