High school basketball: Two in a row for SR boys 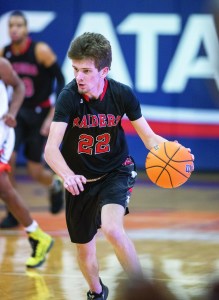 That’s notable because it’s only the third time the Raiders have accomplished that feat in the last six seasons. South had a pair of two-game winning streaks in the 2017-18 season. They beat Ledford and Oak Grove early. Then they beat Thomasville and Oak Grove the second time through the league.

For a three-game South winning streak you have to go back to the 2013-14 season.

South celebrated Senior Night on Friday, making sure that milestone was recognized in an uncertain season that is day-to-day and week-to-week.

“I’m really proud of the growth our team is showing at this point in the season,” South’s first-year head coach Daniel Blevins said.  “We have spent time working on the approach in our game preparation and we are seeing results from the hard work.”

South started slowly offensively, but stayed focused on the defensive end and led 10-4 after a quarter.

The Raiders had things under control by halftime with a 28-12 advantage. East Davidson got the first points of the second half, but Black drove for a couple of buckets as the Raiders pushed the lead to a comfortable 35-14. East Davidson (1-3, 0-2) was unable to make a run to get back in it.

“We are starting to find our identity as a team,” Blevins said. “We are beginning to put some of the pieces together.”

South has bounced back from a lopsided loss to West Rowan and a close loss to Carson.