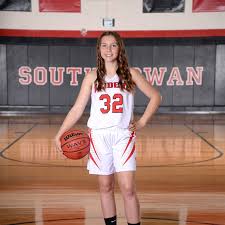 LANDIS — Every win is sweet for the South Rowan girls basketball program, which has been in a rebuilding mode since the graduation of all-time leading scorer Janiya Downs.

The Raiders got one on Friday, beating Central Carolina Conference opponent East Davidson 46-41.

South hadn’t tasted a win in a while. This one ended an 11-game losing streak dating back to last season. South (1-3, 1-0) had nearly won on Thursday before falling by four on the road at South Davidson.

South opened this season with blowout non-conference losses to West Rowan and Carson, but is getting better and is scoring at a decent clip now.

Carlie Moore, one of the seniors being celebrated, scored a career-best 16 points to lead the Raiders. Senior Paige Chabala also had a career high with 11.

“We had a rough start on Senior Night, but we pulled it through,” South coach Alex Allen said.

South trailed 12-7 after a quarter, but got back even at halftime. The Raiders trailed by four entering the final quarter, but scored 19 down the stretch.

South got 13 points at the foul line.

Paige Chabala had three field goals in the fourth quarter, and Cherry made a 3-pointer.

East Davidson opened the season with a win against Southern Guilford, but has dropped its last three.