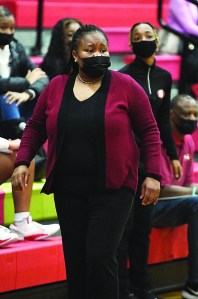 THOMASVILLE — Salisbury’s girls basketball team bounced back from a tough non-conference loss to a 4A and hammered Thomasville 63-28 on Friday.

It was the Central Carolina Conference opener for the Hornets.

Salisbury has won 22 straight CCC regular-season contests and is on a nice 97-17 run overall. There have been some good battles with the Bulldogs over the last four seasons, but the Hornets have won all 11 of them.

They put the Bulldogs away with a dominating third quarter. Salisbury held Thomasville to three points in the third and to nine in the second half.

“We had a good second quarter and a good third quarter,” Salisbury coach Lakai Brice said. “I was pleased with the defensive effort in those quarters. We’re still not where we need to be on defense, but we are getting better every game.”

Salisbury (3-1, 1-0) is definitely putting the focus on defense. That’s what wins championships. The Hornets expect to win championships.

Salisbury has enough shooters and scorers that offense isn’t going to be a problem very often.

High school basketball: Two in a row for SR…