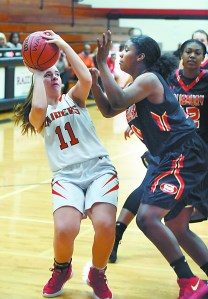 South Rowan’s Paige Chabala battles in a game against Salisbury earlier in her career. Photo by Wayne Hinshaw, for the Salisbury Post.

DENTON —  South Rowan’s girls lost by 44 and 50 points in their first two outings, but they had a serious chance to get a win at South Davidson on Thursday.

South Davidson prevailed in the non-conference matchup 56-52 with a flurry of fourth-quarter free throws.

South Davidson caught up and inched ahead 26-25 at halftime.

South Rowan had a 49-46 lead in the final minutes, but South Davidson got six straight points on free throws to go in front 52-49.

The Raiders got back to 52-all with about a minute to go, but South Davidson made the plays down the stretch.

Sophomore Hannah Harrison led the Wildcats (2-1) with six 3-pointers and 24 points. She was 6-for-6 from the foul line.

Carlie Moore scored 14 for the Raiders (0-3), while Mackenzie Chabala had 13. Madilyn Cherry scored eight, while Eden Childers had seven.

It was an encouraging offensive outburst by the Raiders, who were held to 22 points by West Rowan and 10 by Carson.