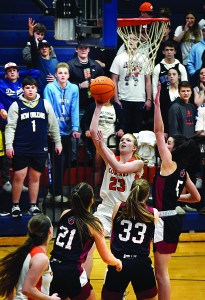 East Rowan doesn’t have any seniors.

The Cougars led the North Piedmont Conference matchup 25-0 after a dominating first quarter and won 61-23 in a running-clock contest.

“We had a really good start,” Carson coach Brooke Stouder said. “We put a lot of pressure on them at the start. We were much more disciplined tonight than we were against North Iredell on Tuesday. This time, we were able to pressure without fouling. That’s a good step.”

Carson won for the 12th straight time against East. The Mustangs last beat Carson in the 2015-16 season when Brittany Small and Jocelyn Lowe produced huge games.

Colbie Perry was hot again for the Cougars (3-0, 2-0) from the 3-point line, making four long ones and scoring 14. Mary Spry had an efficient 10 points on 5-for-7 shooting. Hannah Isley had seven points and four steals. Carleigh Perry had six points, five assists and four rebounds. Aliayah White scored seven points.

Spry had five rebounds, while Kendall Barbee and Colbie Perry had four.

“We had 10 girls score, and that’s always nice,” Stouder said. “Everyone played a lot of minutes. We’ve only had everyone together for a week, but we’re getting better.”