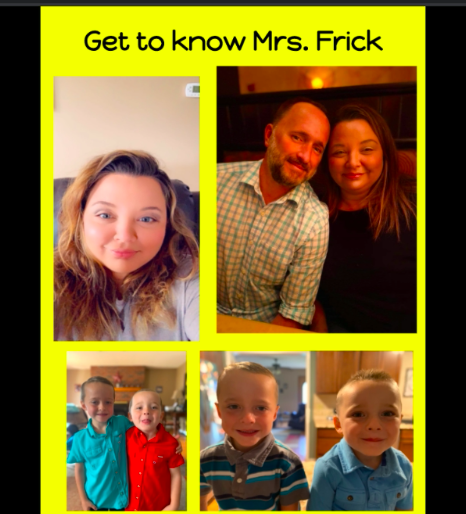 Submitted photo - A slide Brandy Frick uses to introducer herself and her family to her classes.

SALISBURY – Summit Virtual Academy is unique because it has drawn teachers and students from all over the county into its virtual space.

In that role he oversaw E.C. teachers and facilitated Individual Education Plan meetings. He worked as a specialist up until October.

Jackson said he had a knee replacement a year ago and has had multiple leg surgeries. He needed to be sitting and he also wanted to be safe during the COVID-19 pandemic. He also wanted to get back into working with kids. He taught Crosby Scholars academies on the weekends and it brought him joy to teach again.

He decided it was time for a change, so he applied at Summit and teaches seventh grade math.

Jackson said it worked out perfectly for him. Being out of work for medical reasons brought more stress and he felt his obstacles were getting in the way of him being as effective as he could be as a compliance specialist.

“In my last six months as a specialist I did kind of a hybrid role as a homebound instructor,” Jackson said. “They kind of made that adjustment for me because they knew I wasn’t walking well.”

The change was made to give him time to heal and fill in an area the district needed, but he loved it.

“It gives me a peace of mind, because sometimes you just know when you’re doing the right thing,” Jackson said. “And when you can get out of the bed in the morning, and you have this focus and you say ‘you know what, I get to see my kids today.'”

He is still learning and it has been an adjustment and he has had headaches upping his skills to be more tech savvy, but he is not afraid to try and fail or lean on other people.

The academy has also been a major draw for new teachers. Christina Rary teaches mathematics at the school and leads the new teacher support program. She said the virtual school has 32 teachers between their first and third year in the profession.

She taught at West Rowan High School last year and did beginning teacher support there as well. Some of her friends are teachers too and she came from a nontraditional background.

Rary was a Teach for America corps member who studied social and economic justice in College. She wanted to become a teacher because she saw it as an avenue to help students no matter their background.

Not having traditional training she relied on learning from other people and her instructional coaches who helped her be a successful teacher. She wanted to continue to do that in her community.

“It’s been a challenge, I won’t lie, to create a culture over a virtual environment,” Rary said, but said the benefit is virtual is so new that people are willing to be more vulnerable and ask more questions.

As the school grew she quickly realized there would be growing pains and found faculty trying to test out new structures and find a balance in the first semester. She thinks the team has accomplished a lot in-house and everyone is learning from each other.

Some students are thriving, and others have not adapted so quickly. Rary said the school definitely has a population of students teachers are have to check on more, maybe do not come to live sessions or leave their cameras off.

However, Rary said some students are thriving with the flexibility of the virtual environment.

She said the virtual school gives some kids an environment away from the stressful social pressures of middle school so they can focus more on learning.

Kids being kids, they interact in live sessions and have still want to socialize with their classmates, even if they can’t do it in person.