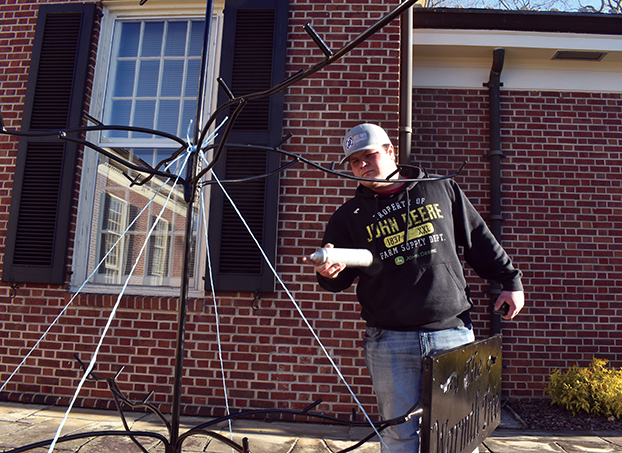 Noah Holshouser uses a can of spray paint to touch up a few spots on the new Warmth Tree that will give people a place to donate winter clothes for those who need them. Ben Stansell/Salisbury Post

SALISBURY — With a slight frost still on the ground and the temperature barely reaching 30 degrees, Wednesday morning was a perfect time to plant a warmth tree.

In a matter of minutes, Matthew Owen and Noah Holshouser installed the roughly 6-foot tall metal “tree” behind the Rowan Public Library’s main branch in downtown Salisbury. The shiny black tree may look almost like a sculpture, but it’s intended to do more than just add to the library’s aesthetics.

Constructed by Owen, Holshouser and other students and faculty involved with the agricultural mechanics program at West Rowan High School, the new warmth tree will replace the old one — an actual tree located behind the library where people leave cold-weather clothing such as hats, scarves and gloves hanging in its branches for anyone in need.

“My favorite thing about this is that it provides needed warm weather items without any meetings, boards, forms or appointments,” Rowan County Public Library Director Melissa Oleen told The Post. “It is an unconditional act of kindness that magically appears during the winter months.”

The tradition of filling the tree with much-needed winter apparel was at least five years ago by an anonymous person. People have continued to hang donations in its branches each winter.

The warmth tree has helped many, but it’s also resulted in damage to the surrounding flower bed, which is maintained by the Rowan Redbuds Garden Club. The club takes care of several beds at the library.

Carol Comer, president of the Rowan Redbuds Garden Club, said people have to walk through the flower bed in order to reach the tree. That’s led to people unintentionally crushing the emerging buds of daffodils and other flowering plants that bloom in the spring. 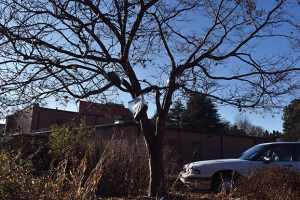 The former tree was a good place for people to donate winter clothes, but it resulted in damage to the surrounding flower bed. Ben Stansell/Salisbury Post

As a way to keep the tradition of the tree alive while also preserving the plants, Comer commissioned a new tree that would be better suited for the task and could be installed at another location on library property.

“The most important thing is to keep that warmth tree going, even if it meant to trample any bulbs going up,” Comer said. “We’d rather have the things they would need left on the tree. We also had some money in our treasury that we decided we could build a tree or have a tree made.”

Comer contacted Owen, who put his students and fellow instructors to the task. Over the course of several weeks, the tree was brought to life.

“(Comer) gave me a rough design and (we) went from that and built it, everything from ordering material, cutting, bending, welding and painting and putting together,” said Owen, who has been teaching at West Rowan High School for six years.

The warmth tree is far from the only community project that Owen and his students have produced. They’ve constructed everything from feeders to fences, he said. The projects are a way for students like Holshouser to learn welding skills by actually doing the work themselves.

“It does me good,” Holshouser said. “I like messing with stuff and I’m a hands on person so being in the shop helps me.” 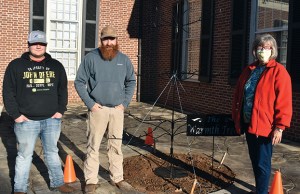 The most time-consuming task during the assembly of the tree, Owen said, was welding and bending the small branches where clothing items can be hung. The tree was finished right before Christmas break, and the sign standing in front of it was printed last week. Comer said that Owen and his students “did a magnificent job.”

The warmth tree is located on the eastern, back side of the Rowan Public Library headquarters and can be seen and easily accessed from South Church Street. Comer plans on moving the donations hanging on the old tree to the new tree.

“Although it is not a real tree, the new ‘tree’ and location will be more safe and accessible without harming the flower beds,” Oleen said. “One positive impact is that the flower beds surrounding the previous warmth tree will be easier to maintain.  I cannot thank the Rowan Redbuds enough for all the wonderful volunteer work they do keeping our flower beds looking good.”

The new tree’s branches are always open for donations.

“I hope that the entire community becomes aware of the fact that the tree is there,” Comer said. “Every item is donated that is on tree and I hope that everybody will buy a pair of gloves, a toboggan, some socks and hang them on the tree.”