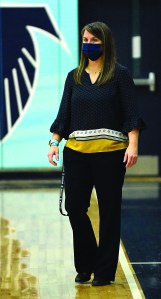 It was the third straight victory for West.

“We’ve got some speed, but it gets a little crazy at times with so many young players,” West coach Ashley Poole said. “Sometimes you just have to hang on and clap your hands. They were going hard, and when young kids are going as hard as they can, you can live with a few mistakes.”

Freshmen De’Mya Phifer (15 points), Mya Edwards (11) and Lauren Arnold (11) scored in double figures for the Falcons. Edwards got nine in the fourth quarter.

Lexington (1-2) is in a rebuilding season and lost to North Rowan 60-16 last week. The Yellow Jackets were held to single digits in every quarter.

“It really was frantic, at times, but I thought we played a pretty good game,” Poole said. “We had a good defensive game.”

Florida State hits over 70 percent from field in…