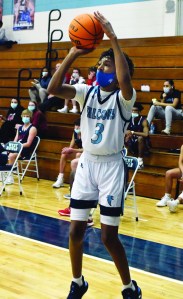 MOUNT ULLA — West Rowan’s boys made 13 3-pointers and wiped out Lexington 76-41 on Wednesday.

Freshman Jayden “Juke” Harris stood out with 18 points. He made five 3-pointers and added an old-fashioned three-point play. He also demonstrated advanced ballhandling and passing skills for a ninth-grader.

Macari Allison scored 12. Noah Loeblein, the football quarterback, racked up 11 in a hurry, all in a spree in the fourth quarter. AJ Mauldin made two 3-pointers and scored nine.

Zeek Biggers, all 6-foot-6 and 330 pounds of him, only scored six points, but he drew a crowd whenever the Falcons tossed him the ball at the high post and his passes to open shooters led to a number of those made 3-pointers.

“We moved the ball well to get shots,” West coach Mike Gurley said. “Graham and Mauldin’s defense and passing were keys to Harris getting open looks.”

The Falcons made some careless turnovers and hit a lull in the third quarter that allowed the visitors to chop the lead down to single digits, but West picked it up again after  Gurley, who coached Lexington to a state title back in 1995, got a timeout.

Harris closed the third quarter with a momentum-building 3-pointer for a 47-32 lead.

Then Graham got hot to start the fourth. He made a couple of corner 3s as the Falcons broke it open.

The Falcons scored 29 points in the fourth quarter.

Lexington got 11 points from junior point guard Matthew Liles. The Yellow Jackets (1-1) had opened with a solid victory over North Rowan.