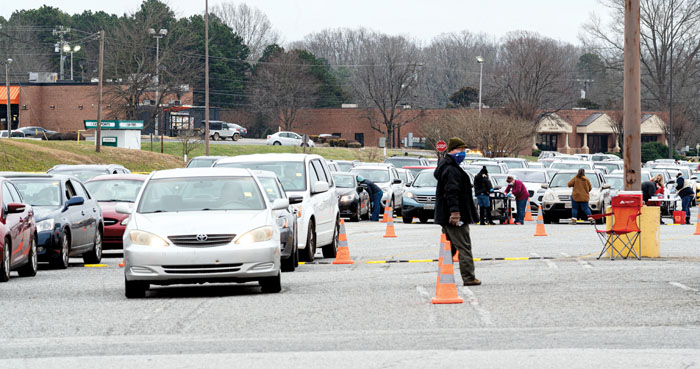 SALISBURY — County officials say they will look into and consider implementing a mix of appointments and first-come, first-served events for COVID-19 vaccine distribution following a presentation at a Tuesday meeting of the Rowan County Board of Health.

The discussion emerged following concerns from local residents and leaders after a limited supply of 210 vaccinations was exhausted within an hour’s time Monday during a drive-thru vaccination event at West End Plaza. More than 100 vehicles were waiting at the West End Plaza hours before the county began administering the vaccine at 9:30 a.m., and dozens of vehicles were turned away.

Tuesday’s discussion centered on a presentation Public Health Director Nina Oliver gave that lays out the pros and cons for each approach.

Oliver said county health officials are familiar with the current method in place, and that it allows them to serve many more locals in the least amount of time. For example, up to 150 doses can be administered in an hour’s time with a first-come, first-served model, while appointments only allow for about 40-50 doses per hour.

Oliver said she spoke with other counties currently utilizing an appointment-based approach. Stanly County is one of those, and it reported to her that only 16.5 vaccines could be given in an hour there.

She said Randolph County reported receiving more than 3,000 calls in a day, which caused a system crash.

Additionally, the current method allows for more flexibility since appointments could not be scheduled until the county has received its shipment of the vaccine.

County health officials rely on the state government to supply them with doses of the vaccine, while state health officials depend on federal allocation. This results in uncertainty for when the county expects its next shipment.

Oliver said she spoke with state health officials about being able to receive more doses of the vaccine, and the county was placed on a list to receive any additional available doses.

Appointments would require additional staff because the county would have to administer the vaccine more often since fewer can be given at a time with this approach. Oliver acknowledges the long wait times associated with the current mass vaccination model, though she noted only about an hour passed between the time locals completed their paperwork and received the vaccine.

The advantages of having appointments, however, is that information can be taken before someone arrives to receive the vaccine, which allows more data and information to be gathered and a reduced level of human error.

A patient not showing up or arriving late to their scheduled appointment can create problems, and some counties have already scheduled vaccination appointments for weeks from now.

In a news conference Tuesday, North Carolina Department of Health and Human Services Secretary Dr. Mandy Cohen said guidance to counties reflects that scheduling appointments for the vaccine are strongly recommended. However, Cohen applauds mass vaccination events via drive-thru as it allows for social distancing.

Oliver said North Carolina operates on a decentralized system that allows each county public health department to make their own decisions for their county.

Oliver also said the online system created by state health officials that must now be used for vaccine distribution has experienced many issues that still aren’t resolved. As a result, health officials have to use paper to obtain patient information and then manually enter it into the system after vaccines are given. This creates another time-consuming process because some vaccine information based on doses administered last week are still being entered into the system.

Dari Caldwell, who was appointed board chair during Tuesday’s meeting, said a hybrid approach would allow for older adults to avoid long waits in their vehicles. Dr. Amy Wilson, who was appointed vice chair at the meeting, said a hybrid approach puts the decision into the hands of the patient, who can then decide if they’d rather wait in line or schedule an appointment.

Also at the meeting, Oliver said that as of Dec. 29, more than 19,000 hours have now been dedicated to the pandemic response in Rowan County since March. For reference, about 8,600 hours make up one year.

“So in 10 months, we have dedicated two years of our lives to the COVID response,” Oliver said. “It really hit me. I do think it’s pretty impactful.”

Additionally, she told the board that though Rowan County has been approved for additional free testing with costs covered by the state. That initiative won’t be implemented until the last week of January or the first week of February. Moose Pharmacy, however, has been added to the current list of local testing sites.

In other business at the meeting:

• Board members swore in Dr. Corrie Connolly, a veterinarian, and Caldwell as new members of the health board. Patty Yost resigned as chairman of the board because she’s been unable to handle the board’s business appropriately due to a family matter. Following a nomination from Klusman, Caldwell was elected to serve as the board chair. And following another nomination from Klusman, Wilson was elected as board vice chair.

• Alyssa Harris, community health manager, told board members that the local health department is due for another community needs assessment, which it’s expected to provide every four years. The county plans to partner with Novant for the assessment, which may include a survey for locals as they wait to receive their second dose of the vaccine. She said the state likes that idea. Questions related to housing issues, food insecurity and transportation — a few social determinants of health — would be included. Additionally, locals may be asked why they or someone they know isn’t willing to receive the vaccine and how county health officials can better connect with the community and get the word out about vaccine safety.

Cheerwine Festival moved to September in hopes of reduced…