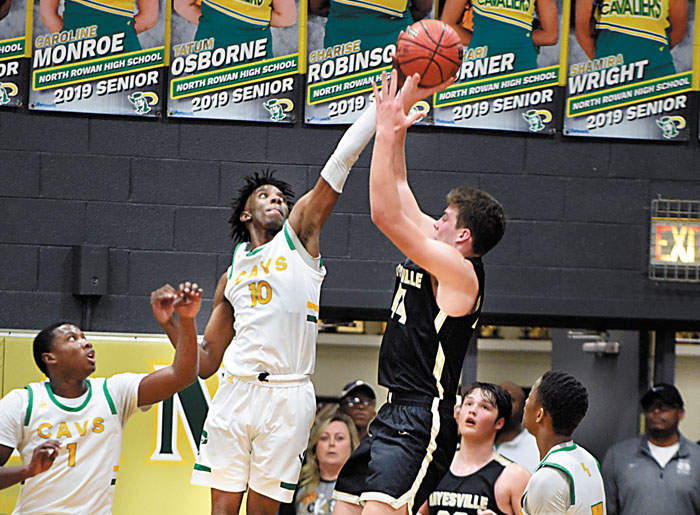 Eighth in a series of reports on local basketball teams …

White was still a work in progress. He barely played as a freshman on a powerful team and averaged a modest 12.1 points as a sophomore, but his ceiling is extremely high due to an unusual combination of height and athleticism. He’s a consensus top-five prospect in his class in North Carolina and has been offered by a host of Division I schools. He probably would have dominated 1A for the Cavaliers as a junior.

The only Cavaliers on the roster who have played much are senior Kendrell Goodes and junior point guard Quashawn Carpenter, but there’s plenty of young talent on hand, and it may be enough to have another solid season. North is almost always going to be a factor at the 1A level and is always one of the favorites in the Yadkin Valley Conference race.

“I think we’re talented enough, but there are a lot of unknowns,” said Causby, who has coached 50 wins and two championship teams in his two seasons in Spencer. “It all depends on how our guys mesh. There’s no learning buffer this season. We’ll have to click quickly.”

The 6-foot-4 Goodes averaged 8.1 points in 2019-20 and produced three 20-point games. He’s a four-year varsity player and he’s starting for the third season.

“He does a little bit of everything,” Causby said. “He’s a very good rebounder and defender. His jumper has come around in our last few practices.”

Goodes led the Cavaliers with 11 points in an opening-night loss to Lexington.

Carpenter, who got in early foul trouble at Lexington, averaged 8.4 points in 2019-20 and had two 20-point outings down the stretch. He was really coming on at the end of last season.

“He can be that next marquee guy for us,” Causby said. “He’s becoming more vocal and helping to mold the young guys, the way that our seniors helped him when he was a freshman. If Quashawn is good, we have a chance to be pretty good.”

Seniors Kendal Mitchell and Kyree Sims were on the bench last season and are back.

“When COVID shut things down, some guys got jobs and went to work, some guys didn’t do anything, and some guys worked on their game,” Causby said. “Kendal worked on his game. He’s improved a lot. He’s a long, high-energy guy and can disrupt defensively.”

Sims is the football team’s starting quarterback. Basketball is scheduled to last into March. Official football practices start Feb. 8, so coaches are dealing with a new dynamic as far as the athletes who are trying to play both sports.

“My first reaction was that it would be great to have basketball before football for a change because we’re always waiting on the football players,” Causby said. “But now I don’t think I like it very much.”

Derrick Hanson, a 6-foot-4 athlete who was North’s JV MVP, jumps well and can slash to the basket.

Freshman Amir Alexander has an ideal basketball frame and is a 6-foot-2 athlete with a nice shot.

“He definitely looks the part,” Causby said. “And he has some savvy for a young player.”

Freshman Jaemias Morrow is a quick distributor. He’ll back up Carpenter this season, but he projects as the point guard of the future.

Junior Deavon Proffitt will help the Cavs with his shooting ability.

“There are going to be ups and downs,” Causby said. “Growing pains are going to come our way, for sure, but this is a close group. I believe we can be good.”