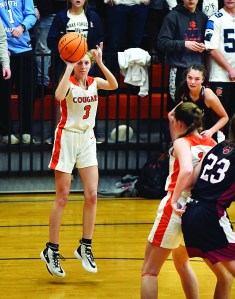 Senior Colbie Perry only made one 3-pointer in the Cougars’ opener, but she made five in Tuesday’s romp. All 15 of her points came from the bonus line.

Mary Spry had 16 points on 5-for-7 shooting and had seven rebounds. Ellie Wilhelm made three 3-pointers and scored 13.

Hannah Isley scored 11 points, although coach Brooke Stouder probably was even more excited about her taking a charge.

Carleigh Perry had seven rebounds and a number of assists for the Cougars (2-0, 1-0).

“We’ve only had everyone together for two practices, but I thought we played really well in spurts,” Carson coach Brooke Stouder said. “North Iredell is well-coached, sound and tall and they gave us some trouble at times.”

Most of Carson’s troubles, for all practial purposes, were over by the end of the first quarter. It was 20-3 at that point and 31-8 at halftime.

North Iredell was Carson’s nemesis for years, but the Cougars have won the last five meetings.

Carson is scheduled to play East Rowan on Thursday.

Carson’s boys were not able to play North Iredell on Tuesday due to a COVID-19 situation.