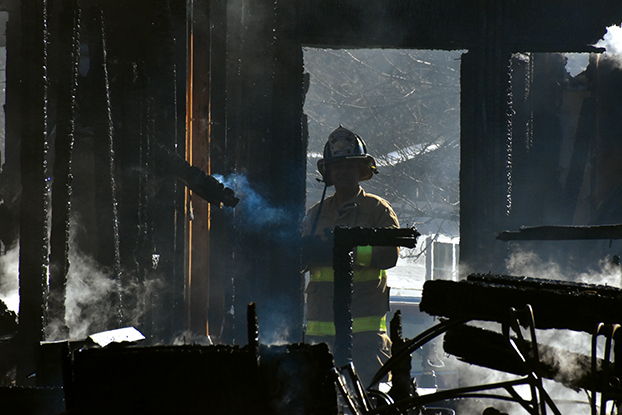 A firefighter looks over the still-smoking rubble of what was once a house. Ben Stansell/Salisbury Post

ROCKWELL — A 69-year-old man and 72-year-old woman were killed in a Sunday fire in rural southern Rowan County.

The Rowan County Sheriff’s Office said the bodies of Larry Chester Brown and Brenda Basinger were recovered Sunday afternoon after a fire destroyed a home on Double Thumb Road near Rockwell.

Rockwell Rural Fire Chief Alan Shinn said firefighters were dispatched at about 11:30 a.m. They found a “fully-involved” fire upon arrival.

The Sheriff’s Office said the first body was located around 1:20 p.m. The second was found at about 1:50 p.m.

Rockwell Rural worked to extinguish the fire with a number of other departments from Rowan and nearby counties. It’s not clear what caused the blaze.

SALISBURY — A 61-year-old man was shot in the leg Sunday while driving on Standish Street near Brenner Crossing Apartments.... read more