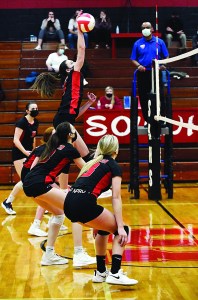 South’s Anna Rymer spikes the ball in a recent match. Photo by Wayne Hinshaw, for the Salisbury Post

South Rowan is at home Tuesday for the first round of the 2A volleyball playoffs.

South Rowan won the Central Carolina Conference, while South Point was runner-up behind East Rutherford in the Southwestern Conference.

Senior Anna Dunbar has been the big hitter for South Point with 183 kills.

There’s lots of high school basketball scheduled Tuesday, although only family members will see it.

North Stanly is at North Rowan. Salisbury hosts Northwest Guilford, which usually has one of the state’s best girls teams.

Catawba’s men’s game at Carson-Newman was scheduled for Wednesday but has been postponed.

Catawba’s women hope to return to action on Jan. 23 at Lincoln Memorial.

Pfeiffer’s Monte Sherrill has been named a Top-100 Collegiate Coach by ExtraInningSoftball.com

The Top-100 list features mostly Division I head coaches and assistants and only seven Division III coaches made the list, with Sherrill being the lone representative from the USA South.