State legislators sworn in early during ceremony in Salisbury 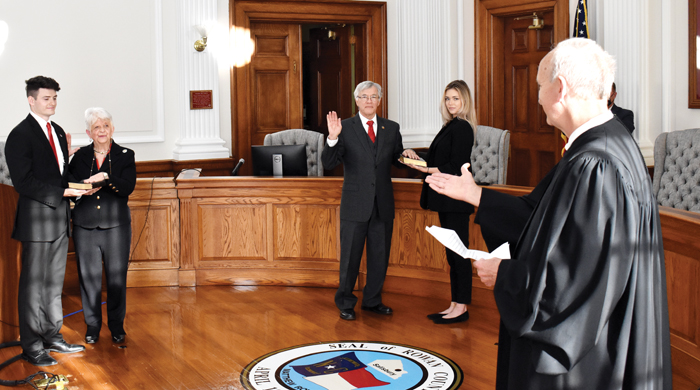 SALISBURY — With their loved ones watching, three state legislators who represent Rowan County were sworn in by North Carolina Chief Justice Paul Newby on Saturday afternoon during an intimate ceremony at the Rowan County Administration Building.

Rep. Harry Warren, R-76, Rep. Julia Howard, R-77, and Sen. Carl Ford, R-33, all placed their hands on the Bible and repeated the oath of office, ushering in their new terms as elected officials. Warren was sworn in for his sixth term in the house, Howard for her 17th term in the house and Ford for his second term in the senate. 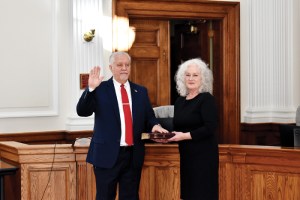 Sen. Carl Ford is sworn in for his second term in the state senate by Chief Justice Paul Newby as his wife Angela Ford holds the Bible. Ben Stansell/Salisbury Post

While most state legislators will be sworn in during a larger ceremony when the senate and house convene in Raleigh on Wednesday, there will be restrictions on the number of guests that will be allowed to attend due to COVID-19. Warren said that house members are not allowed to have guests.

In order to allow their family members to be there for the special occasion, Warren, Howard and Ford decided to hold their own private ceremony, which was common practice among state legislators even before the pandemic.

“We wanted friends and family to have the opportunity to witness us take the oath of office,” Warren said.

Warren contacted Newby several weeks ago and asked him to officiate the ceremony, but at that time Newby was still in a close race with Democratic incumbent Chief Justice Cheri Beasley.

The answer: “I’d be glad to, but I’d like to see if I win first,” Warren recalled.

After the race, which was decided by just 401 votes, was officially called in his favor, Newby called Warren back.

“If I lost, it’d be time for somebody else,” Newby said. “But when I won, I remembered that he reached out and so I reached out to him.” 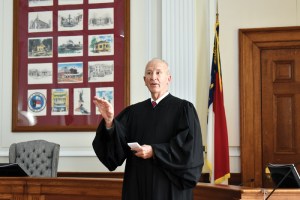 As part of his new duties as chief justice, Newby presided over the swearing-in of Gov. Roy Cooper and the Council of State in Raleigh earlier on Saturday morning. The ceremony was a part of a mostly-virtual inaugural ceremony that featured pre-recorded speeches and performances from religious leaders and musical artists.

After that ceremony, Newby stopped at home for a quick change and then drove to Salisbury to preside over a ceremony that featured a little less grandeur.

“Frankly, and don’t get me wrong, I love the privilege of a big stage, statewide TV swearing-in, but this is what I really love,” Newby said. “Being able to come and speak to a group like this, talk a little bit about history and remind them of the uniqueness of America and the American dream and the American experiment, boy I love that kind of stuff.”

Newby said that the private swearing-in ceremonies are especially enjoyable because he gets to interact with legislators’ families.

“To get to see who the families are, to see folks in their home setting is such a treat,” Newby said.

Ford, who had his wife, three of four children and three of his seven grandchildren attend the ceremony, said that he preferred the private ceremony to the traditional swearing in ceremony in Raleigh.

“It feels good when they’re supporting you,” Ford said. “They all worked for me on the campaign and worked on the polls, it was great to have them here to see the final result, or the beginning of the final result before we go into session. Fun times are ahead.”