High school basketball: Salisbury girls have all the pieces in place 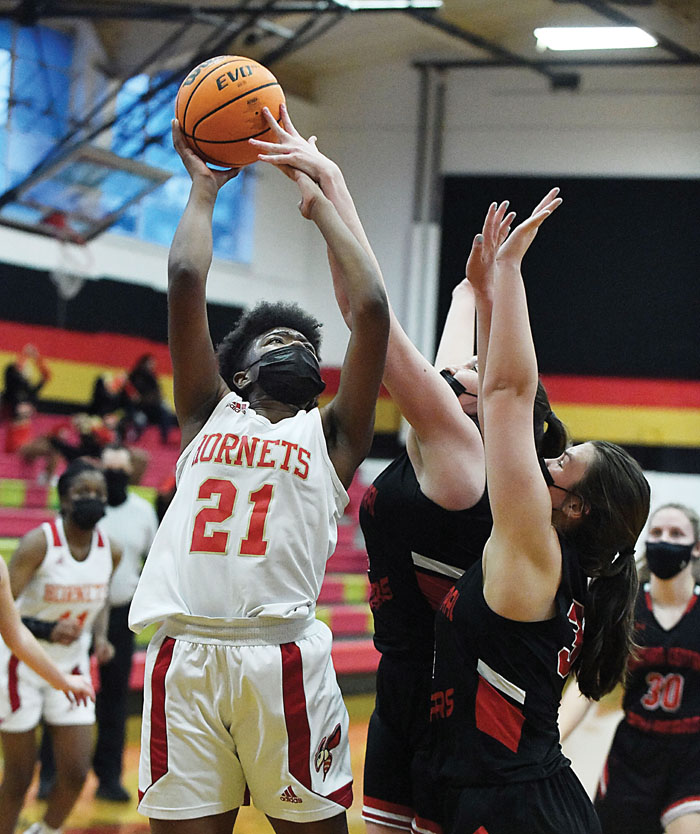 Salisbury's Jamecia Huntley (21) is a key returner for the Hornets this year. Photo by Wayne Hinshaw, for the Salisbury Post

Seventh in a series of previews on local basketball teams …

SALISBURY — The bar has been set high in this program.

The framed photos of state champions are right there for all to see as you walk in the gym. Four photos of immensely talented Salisbury girls basketball teams that ignored scoring averages and postseason accolades. They worked together, even when some of them had to come off the bench, and they won it all.

When they graduated, they had rings and memories, and they left a legacy behind. Few remember who led the county or conference in scoring, but no one ever forgets state champions.

“We look at those photos every single day when we practice,” Salisbury head coach Lakai Brice said. “We want to put the egos to the side like those teams did. Even the Holmes twins, great players, didn’t score 1,000 points for those teams. But they’re remembered. They won championships.”

The 2008-09 team is the one that went 29-3 with all three losses to Central Carolina Conference rival East Davidson. SHS finally got the best of the Golden Eagles when it mattered most, in the fourth meeting, an all-out brawl in the regional final. That Salisbury team scored 100 one night, but the score of that regional final with East Davidson was 26-24. You talk about defending, about buying in, about executing a game plan. No one ever did it better.

The 2009-10 team, coach Andrew Mitchell’s second edition, just flattened people. They vowed to go undefeated on the first day of workouts and they did.  They opened against two county opponents and won 80-31 and 69-16. They won the Christmas tournament championship game by 40.

Then there was the 2010-11 team coached by Chris McNeil that made it a state three-peat.  There was enough talent on that team to start a college program. The Hornets lost to 4A Butler opening night, but they didn’t lose again. They won the state-title contest by 32 points. Yes, by 32. It was just another day at the office. They were that good.

Off to a 2-0 start, with one decent performance and one strong one, Salisbury assembled a talented team for this COVID-shortened 2021 season.

Six of the top seven players from a 29-2 team that was good enough to make 2A’s final foursome are back. They’ve received substantial reinforcements from around the county.

“We could start our five sophomores and have a very good lineup,” said former Catawba College star Brice, who is entering her eighth season at the helm.

The program has rebuilt, retooled and reloaded during her tenure, gathering momentum with program-changers such as Tyzarea Alexander, Bryanna Troutman and Anayia Fulson. Those three  have moved on to the college ranks, but the system and culture to continue winning for a long time is firmly in place.

You have to be fortunate as well as good to win state titles, but a state championship is a realistic goal. There aren’t many years when you can say that. This is one of those years.

“State — that’s what we want to do,” Brice said. “This is a strong group, so much deeper than last year. We want to go hard and we want to go fast. I don’t think anyone will be scoring 20, but we should have nights where five girls get double figures.”

Salisbury was a high-wire act last season. The Hornets weren’t deep, weren’t big and weren’t as fast as they have been some years. But they had really good basketball players, they stayed together and they stayed healthy. They were vulnerable, always one sprained ankle or three quick whistles on the same girl away from disaster, but they kept plugging. Their win over Forbush in the fourth round of the playoffs — Forbush had knocked them out the previous season with the same people — had to be seen to be believed.

“A lot of people told me that was one of the best high school basketball games they ever saw,” Brice said.

Bryant averaged 13.0 points and was first team all-county as a freshman. She had a breakout performance under pressure in the regional final loss to Newton-Conover. On a day when most of her teammates struggled, she dropped in six 3-pointers and 27 points.

The coach’s daughter, Bryant is a college prospect as a combination guard. She boosted her shooting range and ahtleticism in the off-season.

“Kyla is very skilled and she has a high basketball IQ,” Brice said. “She’s worked on being quicker and more explosive.”

Huntley, another sophomore, defines quick and explosive. The 5-foot-10 leaper is a dynamite post player who can run the floor and rebound. She averaged 8.5 points and 6.1 rebounds.

“She has that high motor,” Brice said. “She has more athletic ability than any girl I’ve coached, and she’s improved her jump shot.”

McCullough, a junior who averaged 9.3 points, is a smaller version of Carson bomber Colbie Perry. She can shoot with anyone and her wing and corner 3-pointers can turn a five-point Salisbury lead into a 14-point bulge in three trips down the floor. She can flurry in a hurry. The challenge for McCullough is the same as it is for all shooters, to be a factor in the other aspects. She made some strides as a sophomore with her all-round game and Brice expects more progress.

“She’s improving as a ballhandler and defender and she’s attacking more,” Brice said. “We need her to get to the foul line. She’s our best free-throw shooter.”

Gibson, a 5-foot-9 junior post, did a lot of the dirty work and was more valuable than her modest stats — 6.3 points and 4.3 rebounds per game — would suggest.

“She has a big heart and she’s very physical,” Brice said. “She’s improved her game. She could have a breakout and average a double-double.”

The 5-foot-8 Morgan was an ideal sixth person as a freshman, as she had the versatility to jump on the floor and play forward, center or guard.  The 5-foot-9 Bolder can come into a game and make an impact on the glass. Like Gibson and Huntley, Bolder provides a physical presence.

Natavia Taborn, a quick senior guard who scored 818 points for rival North Rowan, has transferred to Salisbury and might be an ideal fit. She can help replace Fulson, who was a first team all-county player. Taborn averaged 10.4 points as a junior, was 10th in the county in scoring, and made the all-county second team.

“Natavia made it clear that she’s not here looking for 1,000 points; she’s here to win.” Brice said. “We’ve had to ask her to shoot more. She can push the ball, she can score, and she’s a good defender.”

Fulson averaged double figures and four assists per game while tackling a tough defensive assignment and doing most of the ballhandling. Big shoes to fill, but Taborn is a very good player.

Kimya Lynch, who averaged 3.2 points for North Rowan last season, likely will come off the bench for Salisbury. She’s a tough little junior.

“She’s a good athlete and she’s a better shooter than I realized,” Brice said. “She loves that corner 3-pointer.”

Salisbury also has added Haley Dalton and Icesis Nwafor, promising youngsters who were varsity freshmen at East Rowan last season. Dalton averaged 5.9 points a game, but more importantly 6 rebounds, 2 blocks and 2 steals. She’s a long-armed intimidator on the defensive end. She’s been injured and may or may not be able to help Salisbury this season, but she certainly makes the future for the Hornets extremely bright.

“Haley got hurt this summer playing AAU,” Brice said. “She was in a cast and now she’s in a boot. She hasn’t been able to do anything yet, but I saw enough of her in AAU ball this summer to know what she can do for us when she’s healthy.”

Nwafor is another athlete and provides more quality depth.

“She’s been working against Jamecia Huntley in practice every day, so she’s getting better,” Brice said. “She has quite a skill set. She can shoot it or put it on the floor.”

Up from the jayvees are two more good prospects —  Arnasjelle “Pink” Corpening and Antasia Wilson.

“On paper, it all looks really good,” Brice said.

The challenge, obviously, will be to get everyone to play together, to make the necessary sacrifices, to not worry about minutes or points or recruiting, and to focus on championships.

Brice will have the able assistance of Mitchell, who guided the two middle teams in Salisbury’s quartet of championships. He’s been there and done it. His advice and counsel will be important as this season unfolds.

It will be a quick season now that it’s finally here — a furious sprint to the finish line. The Hornets could be there at the end.