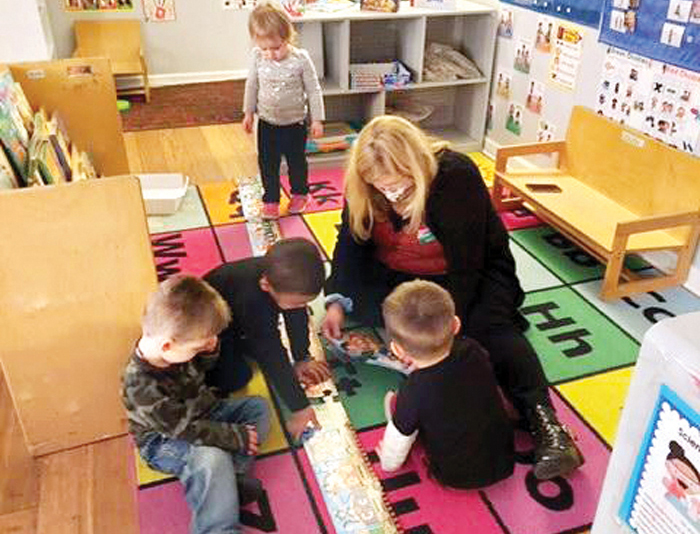 Submitted photo - A teacher at Partners in Learning working with students.

The state currently has recorded no clusters — at least five active cases that can be connected to one another — in Rowan County child care centers, but it does not take a cluster to shut down a center. Partners in Learning Executive Director Norma Honeycutt said some preschool teachers have chosen to leave the field because they or their family are at risk due to COVID-19, and a couple people being out of work at its Catawba College center is enough to strain the nonprofit’s ability to stay open.

“We have done over and above everything we know to do,” Honeycutt said. “We have done a lot of educating of our staff and parents. Truthfully we are relying on them to make good decisions.”

Honeycutt said the nonprofit was doing well reliably keeping its centers open until after Thanksgiving, but since then it has been a nightmare as the pandemic has continued to worsen nationwide.

Child care centers were allowed to reopen in 2020 with COVID-19 safety guidelines — not unlike those in schools. Population density was cut and the kids do not intermingle outside of their classes.

At the Catawba site, where there would normally be about 160 children, PIL is serving 120. At its Novant center, it is serving about 78 instead of 98.

Honeycutt said government funding has allowed the agency to keep its head above water, but funding is difficult despite demand for child care being high. PIL has a few hundred students on its waiting list.

The publicly funded seats at PIL are paid for by the state based on enrollment, and families with subsidies have part of tuition paid already. Privately paying families do not. If a classroom or center closes, the private part of the agency’s funding from families can dry up. Whether to charge families when classes shut down to cover unsubsidized costs is a difficult decision for centers.

PIL had to close a center recently for two weeks and it did not charge its families, but now they have to pay if it closes down a classroom because its expenses continue. The situation places more hardship on care centers and families. 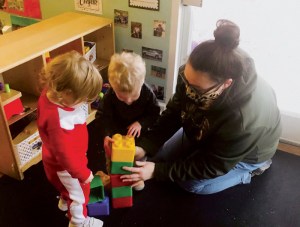 Joanna Smith is filling in as administrator at St. John’s Childhood Development Center. She said the rising cases have resulted in having to quarantine classrooms and the center closed temporarily in December and reopened on Monday.

“We just knew we needed to shut down in order to keep everyone safe and not try to overextend people by staying open,” Smith said.

Many of the parents at the St. John’s centers are essential workers such as teachers and nurses.

Honeycutt said one advantage PIL has is that it has two sites. So, it can try to make things work with the staff it has between the two. Others do not have enough staff.

Robin Kluttz, owner and director of Noah’s Playloft Preschool, said enrollment is down from about 50 students to 18. Almost all current students are subsidized.

Since the pandemic started, Kluttz said, she has not been able to find people who are interested in working in child care, period. And the center has had to close on three occasions despite taking all the safety precautions and even unenrolling students because it did not have enough staff.

Kluttz, who contracted COVID-19 herself, said it only takes one person to be out of work due to infection or quarantine to close the preschool. This is the most difficult year she has had in 25 years of being self-employed in child care.

“I pray every day, really hard,” Kluttz said. “I’m very scared. I’ve been doing this a long time. I’m very scared for my business and my home.”

Kluttz said the center needs state funding at the same level as earlier in 202o. She said it is upsetting to see people not doing their part to help get the country through the pandemic.

Honeycutt said the child care centers needs more government support to keep the doors open as well, and she gave the example of hour limits on reimbursements when a staff member has to quarantine creating more hardship.

When centers and classrooms close, that means parents lose their child care. Some parents can make things work with an aunt, grandmother or other family member, but losing child care is a serious hardship for others and leads to missing work to care for their children.

“I am deeply concerned for the early childhood field and actually the future of our county,” Honeycutt said. “All the research is out there about brain development and early childhood development in the midst of all this stress. It’s not healthy. It’s going to take quite a while for our county to recover from this.”

Jennifer Rouse and her husband, Eric, both work full time and commute out of Salisbury for work. Their son, Griffin, is enrolled in a 3- and 4-year-olds class at PIL.

Jennifer said it is a challenge to keep her child at home and work but is fortunate enough to be able to do so if needed, but knows not everyone has that luxury.

“It’s absolutely a challenge to have a child at home that you want to have continue to learn,” Jennifer said, adding the couple makes a point of not handing their son a tablet or turning on the TV for him when he is home.

Their son was out of the classroom for 24 days after an exposure and 28 counting the Thanksgiving holiday.

Jennifer said they followed a lesson plan and had a partnership with PIL during that period, even joining in on Zoom calls so he could interact with teachers and other kids remotely. She said the agency supported the family and forms great partnerships with their families.

The change was stressful, but Jennifer said she embraces change and made the best of it by embracing the the holidays, spending days listening to Christmas music and baking cookies.

The Rowan-Cabarrus YMCA has stepped in with its Y Academy program to provide care and academic help for younger kids. YMCA CEO Jamie Morgan said each of the six branches are serving about 50 kids per day in four age groups, but that is not nearly as many as it would host for its day camp programs. The size of groups is limited to 10.

Morgan said he feels confident the Y branches are safe environments because they are following safety recommendations closely and there have been no cases found to originate in the branches, but they are still facing difficulty with staffing broadly, not just within its child care program.

Its full-time staff has dwindled slightly, but the part-time staff, which used to be more than 600 people, has dropped to 350. Many of those staff were furloughed and the Y has not been able to call them back in to work.

With the holidays finishing up, Morgan said this is a critical time, and it is increasingly difficult to fill positions to handle child care. Other staff can fill in if needed, but he worries there could be problems if the situation continues as is with no relief.

Financially, the biggest struggle for the local branches is membership dropping by half. Morgan said what was a $12 million operation last year is looking to be in the range of $8 million this year.

Morgan said the local YMCA is well positioned and that has helped it withstand the pandemic, but Ys across the country are closing down and the Rowan-Cabarrus branches need to see an end. He hopes vaccination has put light and the end of the tunnel that couldn’t be seen several months ago.

“I don’t think anybody really understood the scope and the gravity of what this has turned into,” Morgan said.

State legislators sworn in early during ceremony in Salisbury