Aid for the Arts: Local venues, cultural organizations could benefit from Save Our Stages 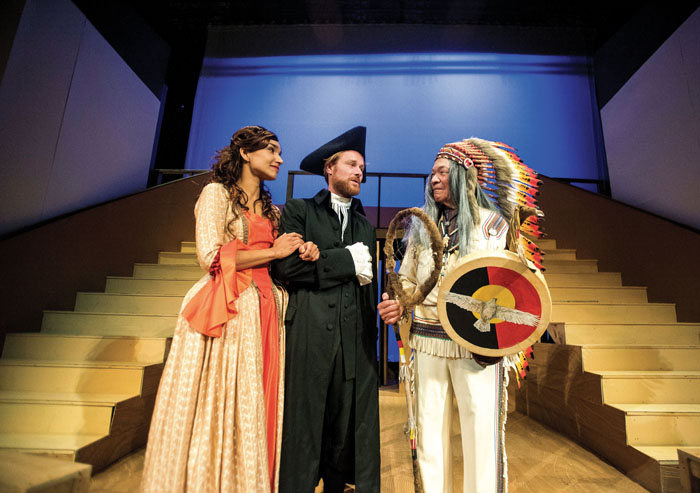 SALISBURY — To say that Ed Norvell appreciates the arts is an understatement.

Not only is Norvell a former board member of the Piedmont Players Theatre company and the Rowan Arts Council, but his family’s name is inscribed on one of Salisbury’s premier theaters.

The Norvell Theater, along with others like the Meroney and Catawba’s Keppel Auditorium, was largely shuttered in 2020 due to the pandemic. Not only has that impacted the venues themselves, but it’s taken on the toll on the artists and actors who typically perform there.

That’s why Norvell was pleased to see that the $900 billion COVID-19 relief package signed by President Donald Trump on Dec. 27 included $15 billion dedicated to the “Save Our Stages” grant program, which will provide much-needed funding for live venues, performers and other cultural institutions like museums.

“The Save Our Stages is geared specifically for those entities that are organized specifically for arts and culture,” said James Meacham, executive director of Rowan County Tourism. “It’s for the closure of the stages, whether you’re the owner of the stage, like Lee Street theatre, or you’re a utilizer of the stage like the symphony, both of those have been severely affected by the fact that productions and stages have had to close down.”

The Save Our Stages Act was a bipartisan bill originally introduced by Senators Amy Klobuchar (D-Minnesota) and John Cornyn (R-Texas) this summer, but was eventually included as a part of the COVID-19 relief package and funding bill.

Norvell said that the Piedmont Players, a nonprofit theater group that owns both the Meroney and Norvell theaters, might be able to benefit from the aptly-named program.

“As you can imagine, we’ve had no income whatsoever,” Norvell said. “We have staff, insurance bills to pay, light bills to pay. We have two huge theaters and then Lee Street has the Lee Street theatre and they’re an integral part of our communities. We can’t lose them.”

Although the COVID-19 relief package was passed last month, much is still unknown about the Save Our Stages program.

According to Arts North Carolina, the Save Our Stages grant program will be administered by the Small Business Administration and will be open to for profit and nonprofit live performance venue operators or promoters, performing arts organizations and museums that can show gross earned revenue in any calendar quarter of 2020 that was 25% less than the same calendar quarter of 2019.

The total grants awarded from the Save Our Stages program will not exceed $10 million. The money will be for specified uses such as payroll costs, rent or utilities.

Applicants must be operating or intend to operate again in the future. An entity that is awarded a Save Our Stages grant will not be able to receive a second Paycheck Protection Program loan. As a result, local arts and cultural organizations and venues will have to determine which program they would like to apply for. Norvell said that the Piedmont Players Theatre company is currently leaning toward applying for the Save Our Stages program, but is still weighings its options.

To be eligible, live venues, performing arts organizations and producers must make at least 70% of their earned revenue from tickets or admission charges for live events, concessions or merchandise at those events or through nonprofit educational activities.

There will be two rounds of funding and venues showing a 70% to 90% revenue decrease will be given priority in grant allocation.

More information about the Save Our Stages program can be found at artsnc.org.

Meacham said that he encourages local arts and cultural organizations to turn to their trusted financial institutions for assistance with navigating the Save Our Stages Program and any other avenues for receiving federal aid.

F&M Bank helped several local arts and cultural organizations apply for the first two rounds of PPP funding in the spring and will provide guidance for the Save Our Stages program as well, the bank’s president Steve Fisher said.

The Salisbury Symphony Orchestra will likely be eligible for the Save Our Stages grant program, but the symphony’s executive director Hunter Scott Safrit said that the organization is still weighing its options. The very fact that the program exists, Safrit said, is encouraging.

“If anything, this new relief bill for protecting the stages and getting arts organizations back up and running and sustainable is showing the importance arts have on the cultures of our society,” Safrit said. “It does seem like there’s been an improved effort to fund the arts overall in this country than there has been in the past couple years.”

In 2020, the Salisbury Symphony Orchestra saw its typically busy schedule of performances and education programs wiped out. While other arts organizations pivoted to virtual formats, Safrit said that it wasn’t fiscally feasible for the symphony to follow suit. The cost of producing a virtual performance would’ve been too much, especially since the symphony wouldn’t receive any money from admission to the event.

Safrit said that he doesn’t anticipate the symphony conducting in-person performances for the first few months of 2021, but did indicate that the Save Our Stages funding could help the organization afford to host several virtual performances.

Likewise, the Piedmont Players didn’t perform for most of 2020 and Norvell doesn’t think that they’ll perform in the Meroney or Norvell theaters for several more months. In the meantime, the Save Our Stages funding could help them keep the lights on.

“It’s been really difficult for our cultural organizations,” Norvell said. “We feel like if we can just make it another six months until the vaccine becomes more widespread.”

Aaron Kepley, executive director of the Rowan Museum, said that the museum will explore applying for a grant from the Save Our Stages program. The museum typically relies on in-person fundraisers to boost its budget, but that was not possible in 2020.

“We are looking to take advantage of anything we can out of the bill,” Kepley said.