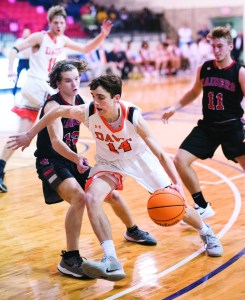 MOCKSVILLE — Carson boys basketball coach Brian Perry warned everyone there would be days like this.

An inexperienced Carson team got decked 69-29 at Davie County in a non-conference matchup on Saturday.

The 29 points tied the all-time low offensive production for the Cougars, who fell 53-29 to Northwest Cabarrus in the 2014-15 season.

It was the most lopsided loss for Carson since an 87-43 wipeout by Statesville in the North Piedmont Conference Tournament championship game in 2012-13.

Just two days after experiencing the euphoria of a home win against South Rowan, the Cougars (1-1) came crashing back down to earth on their first road trip.

‘We just fell flat on our faces offensively,” Perry said. “We couldn’t score. We had in and outs and we missed free throws. We couldn’t get anything to fall. If everything goes right for us, maybe we can make it respectable. (Davie coach) Mike Absher was nice to us. It could have been worse.”

Davie (2-0) has an exciting point guard in Zaharee Maddox, a junior who has attracted offers from DePaul, High Point and Penn State. He scored 15 points.

“Maddox is a tough point guard and Davie has some big bodies,” Perry said. “They were bigger. That bothered us. We didn’t rebound.”

Williams made an on-the-run 3-pointer for a 19-7 Davie lead at the end of the first quarter.

“We’ve obviously got stuff to work on, and we’ll try to fix it,” Perry said.

Emory Taylor, the other returner, scored 20 on opening night, but had just two against the War Eagles.

“It’s not like we can forget about this one, but we’ve got to put it behind us,” Perry said. “We’ve got two home conference games next week and everyone is 0-0 in the conference.”

Davie opened on Thursday with a 20-point win against South Iredell.

With the Davie girls in COVID protocol, the varsity girls contest was postponed to Jan 27.