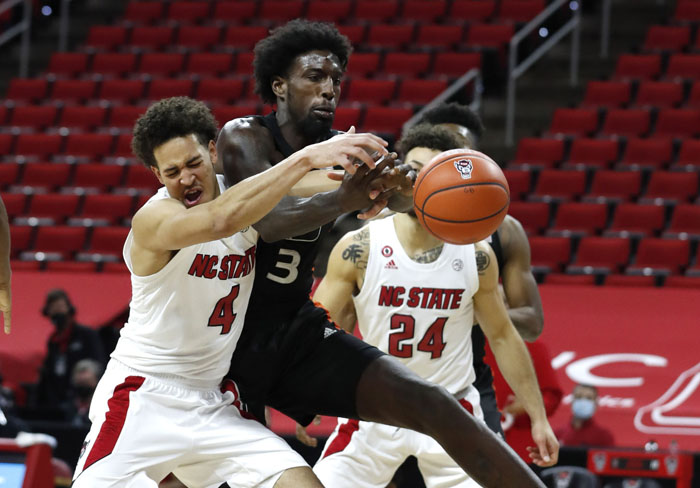 North Carolina State's Jericole Hellems (4) fights for a rebound with Miami's Nysier Brooks (3) during the second half of an NCAA college basketball game at PNC Arena in Raleigh, N.C., Saturday. (Photo by Ethan Hyman/The News & Observer courtesy of the ACC)

Wong had a layup in an 8-0 run inside the last four minutes that put the Hurricanes, who lost their previous three games by a total of five points, ahead 58-54. Timberlake capped the run from the foul line with 1:08 to play.

The Wolfpack got a quick 3-pointer from Thomas Allen in the right corner, his fourth, to make it a one-point game. Miami ran the clock down before Wong missed a layup but Timberlake grabbed the rebound and slammed it home. Seconds later he grabbed a Wolfpack miss and was fouled, the freshman calmly making two at the line for a 62-57 lead.

Wong added free throws after N.C. State missed for a 14-3 closing run before DJ Funderburk scored at the buzzer.

Allen scored 14 points to lead the Wolfpack (6-3, 2-2), who played their fourth tight game. Funderburk scored 12 and matched his career-high with 11 rebounds and Devon Daniels added 11. N.C. State’s last three games were decided by a total of 10 points, including two wins.

Miami led 32-31 after a tight first half. Until the closing seconds, Miami’s biggest lead in the second half came after Wong and Timberlake combined for a 7-0 run for a 40-36 lead. In the middle of the half, Daniels and Funderburk combined for 10 points in an 11-0 that gave N.C. State it’s biggest second-half lead at 51-45.

Miami goes to Boston College on Tuesday. N.C. State is scheduled to play at Florida State on Wednesday.

ROCK HILL, S.C. (AP) — Adonis Arms came off the bench to tally 17 points in 18 minutes to lead Winthrop to its 10th straight victory to start the season and the 15th in a row over two seasons.

Chandler Vaudrin had 12 points, eight assists and seven rebounds for Winthrop (10-0, 7-0 Big South Conference), which is off to its best start in program history.

Jordan Sears had a career-high 18 points off the bench for the Runnin’ Bulldogs (3-7, 2-3). Jaheam Cornwall added 17 points for Gardner-Webb. Jamaine Mann had eight rebounds. Jacob Falko had seven points and 10 rebounds.

HAMPTON, Va. (AP) — Davion Warren made two free throws to end the game, had a career-high 32 points plus 15 rebounds, and Hampton edged UNC-Asheville.

BOSTON — Jay Huff matched his career-high with 18 points, adding eight rebounds on Saturday to lead No. 22 Virginia to a 61-49 victory over Boston College.

Sam Hauser scored 17 with 10 boards to help the Cavaliers (6-2, 3-0 Atlantic Coast Conference) win their third straight since a Dec. 26 loss to top-ranked Gonzaga.

DeMarr Langford Jr. scored 14 and CJ Felder had nine points and nine rebounds for BC. The Eagles (2-9, 0-5) have lost eight of their last nine against Virginia.

OMAHA, Neb. (AP) —  Denzel Mahoney scored a season-high 24 points to lead six Creighton players in double figures with Marcus Zegarowski out of the lineup. The Bluejays (10-2, 6-1) won their sixth consecutive Big East game in the same season for the first time since joining the conference in 2013. The Red Storm (6-6, 1-5) dropped to 0-4 on the road.

Vescovi’s hot hand began early for the Vols (9-1, 3-1 Southeastern Conference) as he hit his first four shots from behind the arc.

PISCATAWAY, N.J. (AP) — Duane Washington Jr. scored 17 points and Ohio State closed the first half with a big run to beat No. 15 Rutgers.