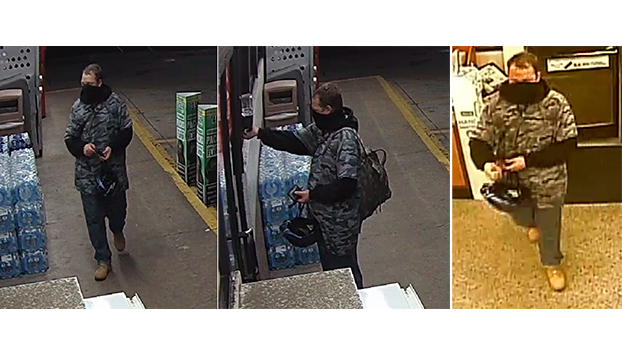 These images, released by the Spencer Police Department, show a man who's suspected of setting fire to cars at a business on South Salisbury Avenue.

SPENCER — Police are looking for a man in connection with an intentionally set fire at an auto fabrication business on South Salisbury Avenue.

Spencer Police released images of a man wearing what appears to be a gaiter, a grey and black camouflage top with black long sleeves underneath, pants and boots. In the images, he’s holding a bicycle helmet in his hand and wearing a backpack.

Spencer Police say the man is responsible for setting fire to vehicles at Carolina Custom Fabrication, a business at 1030 South Salisbury Ave. that had not yet opened to the public. There, two cars were set on fire, diesel fuel was poured onto other vehicles and a brake rotor was thrown through the windshield of a Cadillac truck. The businesses’ proprietor, Cody Morris, showed the Post pieces of charred tarp that he believes was used to try and catch the diesel fuel on fire.

Morris said he wasn’t sure about the person’s motives. Morris had a goal of creating “the cleanest, nicest fabrication shop around.”

The incident occurred at about 2:30 a.m., and a Spencer police officer on a routine patrol spotted the cars on fire at 2:42 a.m. Thursday, according to the police department. Before firefighters arrived, there was an attempt to contain the blaze with fire extinguishers.

The Spencer incident happened not long after a fire was reported in downtown Salisbury at the Whitley, Jordan and Inge law firm, but the two have not been officially linked to one another.