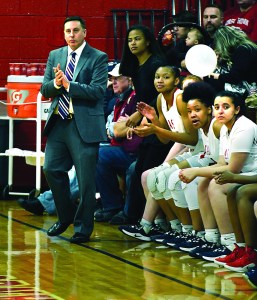 Central Davidson won 49-32 in the East gym against the Mustangs, who have no posts and no seniors.

“Our lack of size hurt us so much,” East coach Kevin Holland said. “I don’t even want to know what the rebounding difference was.”

Salem Ward and Sidney Hatfield scored 11 points each to lead the Spartans (2-0).

East (1-1) got a career-high 10 points from Madie Honeycutt, a junior who is the only varsity returner. Freshman Hannah Waddell also scored 10.

The remaining dozen points for East were spread among five players.

The Mustangs cut the deficit to 29-20 in the third quarter, but the visitors responded.

“We had a nice little run, but then they had a bigger one to pull away,” Holland said.

East is scheduled to start North Piedmont Conference play Tuesday at West Rowan. The Falcons (1-0) are looking to reload with a strong freshman group.