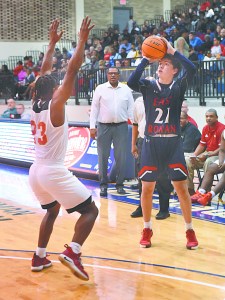 The Mustangs were at home and beat Central Davidson 61-50 in a non-conference matchup.

East lost to Central Davidson last season when it struggled through a 2-23 campaign. Central (1-1) had opened this season with a romp against 1A South Davidson.

East got balanced scoring for the second straight game. This time the Mustangs (1-1) were able to add defense to the recipe.

“We played hard, played with a lot of intensity,” Porter said. “We gave effort the whole game. We played good defense and executed on the offensive end.”

“Jordan and Sprinkle led us with their outside shooting,” Porter said. “Pinckney made some 3-pointers that really opened up the floor for us.”