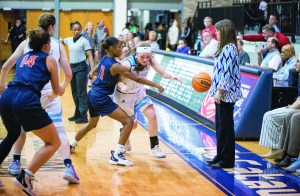 CHINA GROVE — Senior-heavy Carson should have a good chance in every game it plays this season.

The Cougars opened this COVID-shortened season with an early knockout of visiting South Rowan on Thursday, rolling to a 60-10 non-conference victory over the Raiders.

It’s not like Carson was running it up. South’s second-year coach Alex Allen is a former Cougar and is someone Carson coach Brooke Stouder things the world of.

“Our girls were excited to play,” Stouder said. “They’ve waited so long to get out there. Finally, they got to play a game and we got off to the fast start we wanted. Our defensive intensity led to easy transition points.”

The 10 points permitted by the Cougars tied the school record for fewest allowed. Carson won 50-10 against Northwest Cabarrus in the 2016-17 season.

The 10 points scored by South was the fewest it’s ever scored.

It was 23-1 after a quarter and 43-7 at halftime. When Carson’s lead topped 40 points in the third quarter the running-clock mercy rule was triggered.

Former East Rowan star Mary Spry played her first game for the Cougars. She had 16 points and six rebounds. Spry missed once. She was 7-for-8 on field goals.

Hannah Isley produced 11 points on 4-for-6 shooting and had seven steals. Colbie Perry only made one 3-pointer, which is unusual, but she scored 11 points.

“We got good production from a lot of people,” said Stouder, who is in her 15th season as Carson’s head coach.

South turned it over 38 times.

It also was a tough shooting night for the Raiders. They were 4-for-29 from the field and 0-for-12 from 3-point range.

Sophomore Madilyn Cherry made three of South’s field goals. Carlie Moore made the other. Moore was 2-for-4 on free throws and was the only Raider to get to the foul line.

Carson is scheduled to play at Davie County on Saturday, although weather may become a factor.