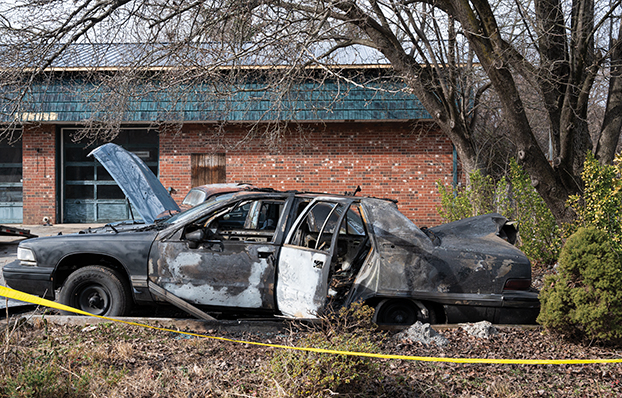 Josh Bergeron / Salisbury Post - A charred car sits in the parking lot of a business on Salisbury Avenue in Spencer. This car and other were believed to be the victim of an arson.

SPENCER — A man working to open a car fabrication business was the victim early Thursday of what’s believed to be an intentionally set fire.

Carolina Custom Fabrication, a business at 1030 South Salisbury Ave. that had not yet opened to the public, saw two cars set on fire, others doused with diesel fuel and a brake rotor tossed through the windshield of a Cadillac truck.

A Spencer police officer on a routine patrol spotted the cars on fire at 2:42 a.m. Thursday, said detective Mike File. Two cars were fully engulfed in flames, and File said there was an attempt to contain the blaze with fire extinguishers before Spencer firefighters arrived.

The incident occurred within 45 minutes of a fire in downtown Salisbury that investigators declared arson, but File said he could not link the two together.

“Not at this point. We’re looking at all possibilities,” he said.

The business’ proprietor, Cody Morris, told the Post he received a call at about 3 a.m. and drove to his would-be business as quickly as possible. He’s not sure who the perpetrator might be or their motivations.

Morris had begun working to open the business about two months ago, with a goal of creating “the cleanest, nicest fabrication shop around.” He was reared in Rowan County, moved to Arizona for college and has lived elsewhere in the U.S., doing auto work, before coming back here. Now, he’s wondering what’s next for his would-be business and whether the car owners had insurance that would cover the damage — one of whom is a friend he’s known for 20 years.

On Thursday, Morris pointed to burned pieces of a tarp that he believes were used to try and light the diesel fuel and other remnants of the incident.

File said anyone with information about the fire and vandalism can contact him at 704-633-3574 or submit a tip to Salisbury-Rowan Crimestoppers by visiting tips.salisburyrowancrimestoppers.org or calling 1-866-639-5245.