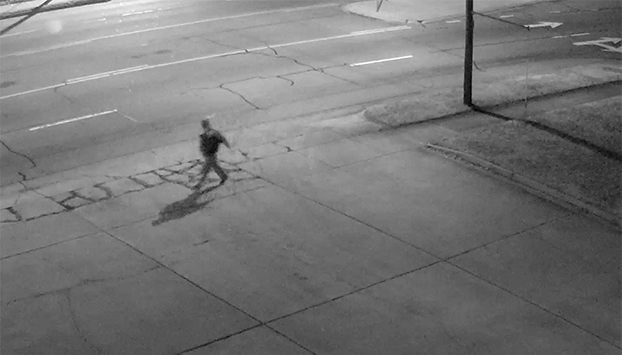 A silhouette of a woman is shown walking down Innes Street on Thursday. The image was released in connection with a murder on Bank Street.

SALISBURY — Police are investigating two murders, an arson and a robbery that occurred Wednesday evening and early Thursday.

At 209 E Bank St., a man named Dante Smith, 33, was shot and killed during a robbery at an apartment. A female and male are being sought in connection with the incident. Full descriptions of the suspect were not immediately available, and suspect images released by police only showed silhouettes of a woman walking down Innes Street; identifiable features were not visible.

Police were called to the scene of Smith’s murder at 2:25 a.m. on Thursday.

Salisbury Police also are investigating the death of Rodeshia Safrit-Allen, 30, who was found at Zion Hills Apartments on Standish Street. Undisclosed, suspicious circumstances mean the case is being treated as a homicide, police said. Police were not able to provide further information Thursday morning.

Police were called to the scene of Safrit-Allen’s death at 6:02 Wednesday.

In the arson incident, Whitley Jordan and Inge law firm, 305 N. Main St., was badly damaged in a fire that started on the ground floor of the two-story downtown building. The Salisbury Fire Department says the blaze was contained to the first floor, but there was smoke, heat and water damage throughout the rear of the building. State investigators are helping local agencies investigate the blaze.

Firefighters were called to the law firm at 2:10 a.m. Thursday. 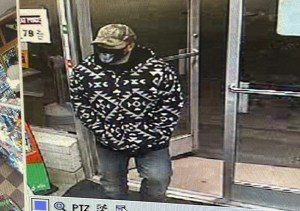 An image of the suspect in a Rushco robbery released by police.

In a third incident that occurred around 2:23 a.m. Thursday, a man robbed the Rushco convenience store at 1901 West Innes St. of a small amount of cash. The man was described as being a white man standing 5 feet 10 inches and wearing a black and white jacket, camoflouge hat, black facemask with a white skull on it and blue jeans.

People with information about the crimes can contact Salisbury Police at (704) 638-5333 or call Salisbury-Rowan Crime Stoppers at 1-866-639-5245. Tips may be submitted online at tips.salisburyrowancrimestoppers.org, via Facebook private message or via the Nixle app by texting 888777 with the words: TIP MYSALISBURY (your tip information). Caller identity is not required and information will remain confidential.