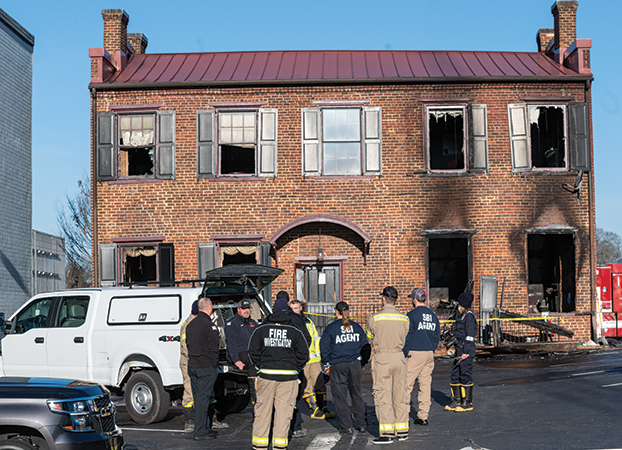 Josh Bergeron / Salisbury Post - Fire investigators from state and local agencies talk Thursday outside of a law firm on North Main Street that was badly damaged in a fire.

SALISBURY — Attorney Darrin Jordan tried to look for silver linings Thursday as he stood feet from his charred office building.

“When we go to work on this building, we can update our wiring and put in better internet. You know, you’ve just got to look at the bright side. I’m a half-full kind of guy,” Jordan said.

The law office — Whitley, Jordan and Inge, located at 305 North Main St. — was the site of an intentionally set fire, investigators said. At about 2:10 a.m., Salisbury firefighters found heavy fire coming out of the first floor office in the back of the building. The back office was destroyed, and the rest of the first floor received heat and smoke damage.

Salisbury Fire Marshal Terry Smith said firefighters were able to rule out all accidental causes and found some indications the blaze was intentionally set. Investigators collected evidence that’s been sent off for testing. Windows on the front and back of the building were broken by firefighters to provide ventilation. Windows in the immediate vicinity of the fire were broken when firefighters arrived, but Smith said that’s not unusual for fires, including ones that are not intentionally set.

Importantly, Smith said he believes the building can be restored to its former glory.

Some other good news: Jordan said he believed most of the files were in areas not charred by the fire. 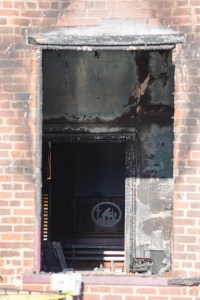 Josh Bergeron / Salisbury Post – An image of a soldier with a rifle kneeling in front of a grave can be seen inside of a law firm that was badly damaged by a fire early Thursday.

“I think we’re going to be OK file-wise,” he said. “As soon as they release the scene to us, we want to get in and get our files secure.”

On Thursday morning, the law firm was searching for places to store their records temporarily.

“Except for Cecil’s office and the reception area, from what I’m told, that’s where the main fire damage is, the rest of the office seems to be essentially water and smoke damage. We can deal with that,” Jordan said.

For attorneys such as Jordan, court has looked different depending on the venue. Jordan says he often works on cases in federal court, and trials are continuing there. Since Dec. 14, non-essential, in-person court proceedings have been stalled because of a surge in COVID-19 cases. So, that means only emergency matters such as restraining orders, he said. Jordan said attorneys at the firm have also been making use of virtual meeting software for court matters, too.

People with information about the arson can submit a tip by visiting tips.salisburyrowancrimestoppers.org or calling 1-866-639-5245.