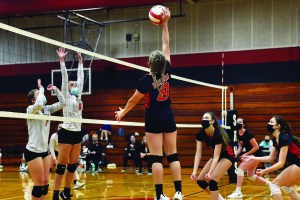 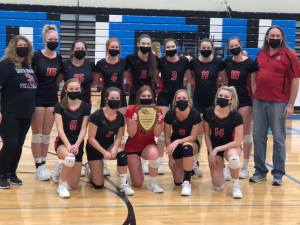 MIDWAY — South Rowan’s girls are making the most of a COVID-shortened volleyball season that will be their swan song in 2A.

They’ll spend at least the next four seasons in 3A, and no one in the Central Carolina Conference is going to miss them in this sport.

South, coached by Jenna Horne and Barry Rymer, hasn’t lost a match to a CCC opponent since 2018.

South hasn’t dropped a set against CCC competition this season, much less a match.

MaxPreps ranks South No. 19 in the state for all classifications and No. 1 in 2A.

On Wednesday, in Oak Grove’s gym, the Raiders (14-1) added more hardware to a trophy case that has gotten a bit more crowded this fall. Top-seeded South beat third-seeded Central Davidson 25-17, 25-10 and 25-22 in the championship match.

Anna Rymer is the only from that group who is a senior.

Playoff pairings are expected to be released on Saturday. With West Rowan losing in five sets to South Iredell in the North Piedmont Conference semifinals on Wednesday, South will likely be the only Rowan team to make an appearance in the reduced playoff brackets. Carson will have a very long run of playoff appearances ended.

Central Davidson and CCC regular-season runner-up Oak Grove are assured of being in the 2A playoffs. The 10-team CCC gets three automatic berths.