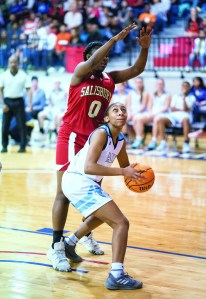 LANDIS — West Rowan’s girls are one of the county’s mystery basketball teams after graduating five senior starters, who had carried the program for a long time.

But it may not be long before some of the new faces are household names.

Freshmen Lauren Arnold (16) and De’Mya Phifer (15) combined for 31 points on Wednesday and led the Falcons to a 66-22 non-conference romp at South Rowan.

“It’s a much different kind of team than what we’ve had in recent years,” West coach Ashley Poole said. “We’ve got a lot of work to do with so many young girls, but this was a good start.”

West has a very young team and will likely get more players from the volleyball squad, including 6-foot freshman Emma Clarke.

South got half of its 22 points from Mackenzie Chabala, but no one else had more than four.