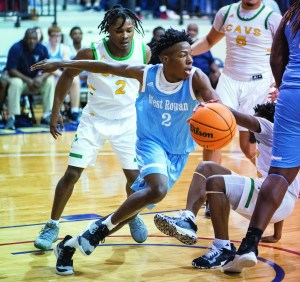 LANDIS — West Rowan’s boys are expected to be very stout this season, and Wednesday’s opener didn’t do anything to sway that opinion.

The Falcons thumped South Rowan 81-38 as West coach Mike Gurley logged his 425th win at the helm of the Falcons. This is Gurley’s 24th season in Mount Ulla.

There aren’t many Salisbury-Rowan Hall of Famers who are still active, but Gurley is one of them.

West dunked frequently and got 26 points from quick guard Jalen Moss, the reigning Rowan County Player of the Year. This wasn’t Moss’ career high. He had a 35-point outburst last season.

Braden Graham, a former Raider who led the county in scoring in 2019-20, now suits up for West. He scored 20 against some ex-teammates.

Moss and Graham had a dunk apiece.

That was 59 points right there for that trio, and that was plenty.

South coach Daniel Blevins was making his debut against a tough opponent.

South will have a much better chance when it takes on a rebuilding Carson club on Thursday. That’s one of several contests moved up a day due to weather concerns.

Nathan Chrismon, a junior who has been a standout in baseball and football, is playing hoops this season for the first time. He led South with 12 points. Barrett Thompson scored seven.