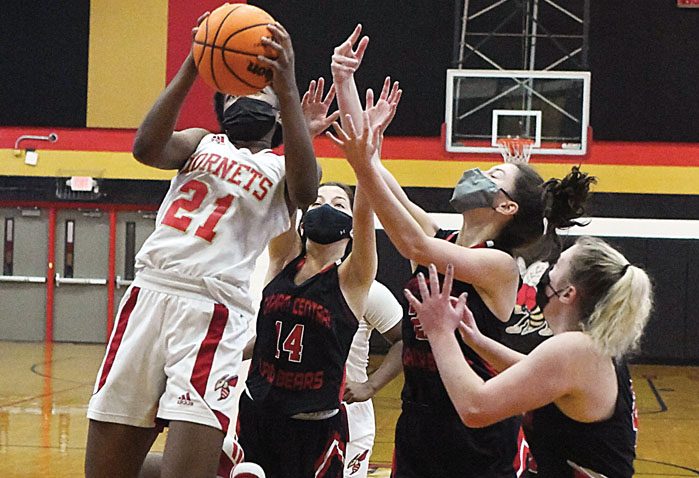 Jamecia Huntley (21) grabs the ball for the Hornets in front of Sadie Gaines (14) and her Chatham Central teammates during Wednesday’s game. photo by Wayne Hinshaw, for the Salisbury Post

Not scary in a Halloween way. Scary in a good way.

Scary in a mobile, agile and hostile way. Scary in a how does someone that tall and that young move so well sort of way.

Noble doesn’t get up as high vertically as sophomore Jamecia Huntley, who might bump her head on the gym ceiling one night, but now the Hornets have twin towers.

And if another tall sophomore, Haley Dalton, gets healthy, they’ll have triple towers.

There’s an awful lot of talent on a Salisbury roster that is much deeper than last season’s, and the Hornets looked awfully good on Wednesday for this early. They crushed a Chatham Central team that is nowhere near as bad as the 66-24 final score sounds. The Bears from Bear Creek will win their share in 1A. They just ran into a whirlwind.

“We got up and down and shared the ball,” Salisbury’s eighth-year coach Lakai Brice said. “We played with energy. This is the way I expected us to play. I didn’t recognize us on Tuesday night. It’s like we were two completely different teams.”

Salisbury did OK in Tuesday’s opener, a 67-49 win at Forest Hills, but the Hornets didn’t click to suit Brice and assistant coach Andrew Mitchell.

Outing No. 2 was seriously better.

It was 19-10, but then suddenly it was 44-10. The Hornets staged a 25-0 run to end the first half.  It was a combination of devastating defensive energy and balanced offense.

“I didn’t know what I was looking at on Tuesday,” Brice said. “But this was what we wanted to see. We’ve been focusing most of our time on the defensive end and if everyone concentrates on defense and gets on the same page on defense, we’ll have a really good team. We have enough scorers that our offense should take care of itself.”

Icesis Nwafor, a transfer from East Rowan, didn’t score in a jittery opener, but she contributed 10 efficient points on Wednesday.

“Icesis is very powerful inside and she attacked on the boards,” Brice said. “There are going to be some nerves in a first game. A lot of the girls looked much more comfortable tonight.”

Rachel McCullough, who didn’t shoot well on Tuesday, lit up on Wednesday on both ends of the floor and led the Hornets with 15 points. She looked quicker and more active than last season, and she’s always been a zone-buster.

Huntley and Kyla Bryant scored 11 each. Huntley got nine in the first half. Bryant added five assists and she was a major part of the Hornets’ 20 steals.

Salisbury (2-0) had two assists for every turnover, and when you only turn it over seven times while playing at a frenzied pace, that’s pretty impressive.

Chatham Central (0-1) had several girls who appared to be quality shooters, but the Hornets rarely let them set their feet. They forced them to put the ball on the deck or forced them well behind the 3-point line. And they did it without reaching and grabbing fouls.

“We took a nice jump from our first game,” Brice said. “I’m very pleased with this performance.”

Lindsey Johnson made three of the five 3-pointers that the Bears swished.

But Chatham Central didn’t get anything easy. The visitors got only one point from the free-throw line and every layup attempt was seriously challenged.