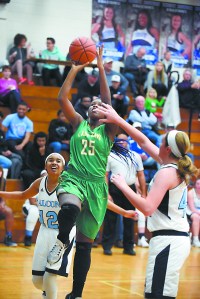 North’s Makiya McDaniel in action vs. West Rowan. Photo by Wayne Hinshaw, for the Salisbury Post

LEXINGTON — Hannah Wilkerson, Kamora Cannie and Makiya McDaniel picked up where they left off and their young teammates stuffed the stat sheet on Wednesday.

North blew out Lexington 60-16 in a non-conference opener for both squads.

It was the first game as North’s head coach for Anthia Smith. She’s been an assistant to Lamar Wilkerson, who’s gotten the program rolling again in recent years.

Even in a COVID-shortened season, Hannah Wilkerson should easily surpass 1,000 points as a junior. She has 931 for her career after a big opening night. She had 17 points, 10 rebounds, five steals, five assists and three blocks.

McDaniel had 13 points and four rebounds.

“Our girls came to play,” Smith said. “Our veterans set the tone for what to expect. I was very proud.”