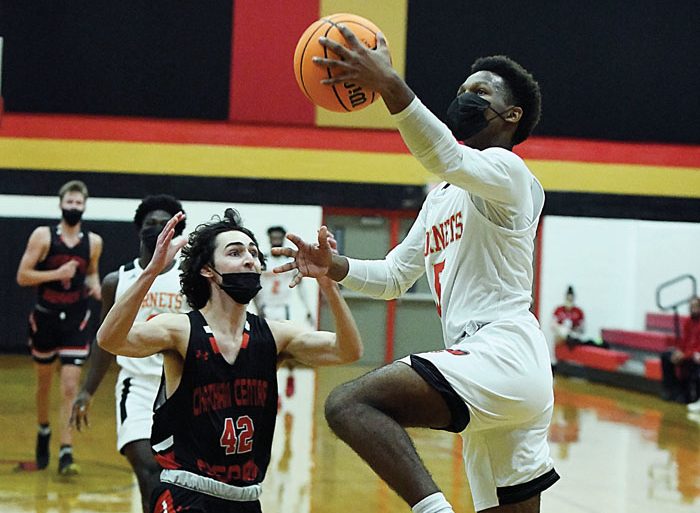 Salisbury’s Mike Geter (5) heads to the hoop in front of Colby Williamson (42). photo by Wayne Hinshaw, for the Salisbury Post

SALISBURY — The Salisbury boys basketball team may have gotten off to the state’s toughest start.

They’d certainly get votes for it.

Tuesday’s overtime road setback at nemesis Forest Hills was followed by Wednesday’s mind-blowing home loss in a game that looked like a laugher for more than a half.

Writing a new chapter when it comes to the agony of defeat, the Hornets were up by as many as 23 points before losing to Chatham Central 70-67 in double overtime.

“I’m disappointed with myself as a coach,” said Salisbury’s veteran skipper Bryan Withers. “I don’t think we’re prepared to finish games yet. Since  Dec. 29, when we came back to practice, I have tried to get things in, but I knew we were going to be a tired team in the second half tonight.”

Salisbury was quicker, was getting steals off pressure and appeared to have Chatham Central on its heels and completely overmatched in the first half.

Some fans knew that Chatham Central had won in stunning fashion at Yadkin Valley Conference opponent North Rowan, Salisbury’s biggest rival, last season, but the Bears didn’t appear to have a prayer in this one. Their main guy, Michael Moore, a pretty special 6-foot-3 multi-sport athlete, was having an off night. He missed point-blank shots. He got out-rebounded. He threw passes out of bounds. He looked frustrated. He had three measly free throws to show for his efforts in the first quarter and the Hornets handed him a Zero bar in the second quarter.

The handful of parents allowed in the gym were starting to feel sorry for the Bears.

But a combination of complacency, foul trouble and free-throw woes piled up during the second half for the Hornets.

Valuable lessons were learned in the non-conference matchup.

When Jalon Walker smashed down a dunk with football All-American authority early in the third quarter, the Hornets led 38-17.

But Moore buried a 3-pointer from very deep and that got him going. His teammates sensed the change in his demeanor. They followed his lead, and by the end of the third quarter, Salisbury’s advantage had been sliced to 45-33.

It was still double digits, still a substantial lead, but there were danger signs. The twin sins of fatigue and foul trouble were everywhere.

‘These young men gave me everything they had,” Withers said. “As a coach I have to find a way to finish when we have a big lead.”

Salisbury’s edge slowly melted in the fourth quarter, as whistles mounted and Hornet free throws banged harmlessly off the rim.

“We need to shoot free throws for days,” Withers said.

Captain Nate Brown, a hard-nosed guy with a very soft shot, tried mightily to stem the tide. Jones, who scored 17, calmly made a three-point play for a 53-46 lead with 2:38 left in regulation and he made a floating, attacking bucket, a fearless bucket in the lane, for a five-point lead with 1:03 left.

But those last 63 seconds of regulation lasted a week. Chatham Central was no longer settling for jumpers, especially Sawyer Elkins. With Salisbury enforcer Jalon Walker eliminated by fouls, the Bears were getting to the rim and to the foul line.

Victory was still in sight, but the Hornets threw up a difficult shot late, Moore knocked down a couple of free ones, and it was 57-all.

Zeb Harry had the last look of regulation from straight on — freshman Mike Geter drove and dished to him — but Harry’s jumper from 3-point distance wouldn’t drop, and the teams headed to overtime.

By the time the extra periods arrived, the Hornets had seen veterans Brown and Joe Witherspoon  join Walker as casulaties of fouls, and there wasn’t a whole lot of firepower left. Point guard Javon Smith, a good, experienced player who transferred from Carson, fouled out in overtime.

Geter and then Deuce Walker, both freshmen, made tough, driving plays that kept the Hornets alive, but without their big men, they couldn’t deal with Moore. He was living at the foul line.

With 1:10 left in the second overtime, Chunn put Salisbury ahead 66-65 with a 3-pointer. That was the last ray of light for the Hornets. They would add just one more point, on Harry’s too-little and too-late free throw.

After that three-point first half, Moore poured in 21 in the second half. He had nine more in the overtime sessions to finish with 33.

“We need to understand the things that make us good,” Withers said. “This is a bad loss, but we will be ready for conference.”

The Hornets have played the first two without Cam Stout, their best shooter. He’s been out with sickness.

“When he gets well, things will change,” Withers vowed.