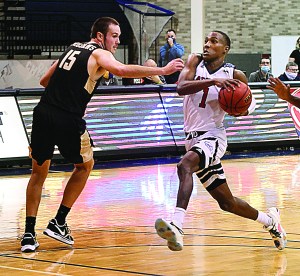 CHARLOTTE — Shooting 29.6 percent and losing the turnover battle in a big way, the Catawba Indians gave themselves no chance to upset Queens on the road on Wednesday.

The Royals took the South Atlantic Conference contest 77-59 over the Indians, who had acquitted themselves well in their previous outing, an exhibition at Wake Forest.

Queens has had Catawba’s number for a while. Kenny Dye is always a problem and led the Royals with 18 points.

Queens (5-2, 4-1) shot an unremarkable 41.7 percent from the field and a dismal 18-for-34 from the foul line, but the Royals made nine 3-pointers and committed only nine turnovers. They shot better than 50 percent in the second half to compensate for a frigid first half.

Catawba competed evenly on the boards, but 3-for-17 3-point shooting won’t get it done very often.

Catawba got only two combined points from the two big guys who started.

Catawba started strong and led 8-0 at the outset.

It was a two-point game midway through the second half when an 8-0 burst by the Royals put them in the driver’s seat.

The bright spots for the Indians (2-4, 2-4) were 19 points by touted guard Marcus Burwell, who has been battling an ankle injury, and solid 24-for-28 free-throw shooting. Caleb Robinson came off the bench to grab a team-high nine rebounds. Terrence Whitfield, usually the Indians’ top scorer, settled for 10 points.