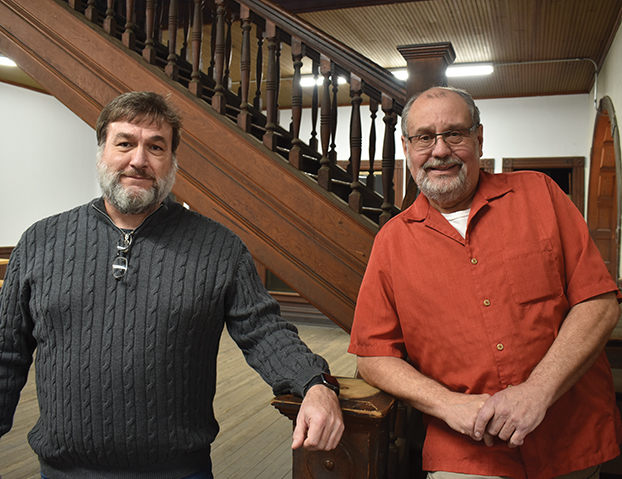 Bill Greene and Dave Loflin stand together on the stairwell leading to the third flood of the Bell Block Building. The duo has big plans for the historic structure. Ben Stansell/Salisbury Post

SALISBURY — As Dave Loflin recorded his commentary for his portion of last year’s virtual October Tour, he wasn’t shy about sprinkling in a few hints pertaining to the future of the Bell Block Building in downtown.

Dave and his wife Cindy purchased the Bell Block Building, which was constructed in 1898, from the Historic Salisbury Foundation decades ago. Since then, the Loflins have had success operating The Thread Shed out of the ground floor.

The two floors above The Thread Shed have been vacant for years — until now.

“I’d been thinking about it and it’s such a beautiful upstairs that I wanted it to be developed,” Loflin said. “I put in the OctoberTour, when we did the commentary, how it was just waiting on someone to develop it.”

That someone is Bill Greene. Greene, who has been heavily involved in the city’s downtown for decades, watched Loflin’s video on the OctoberTour site “eight or nine times.” He picked up on the not-so-subtle clues.

“Dave was pretty obvious when you really listened to him and understood what he was saying,” Greene said. “It was a good cue.”

After seeing Loflin’s lightly veiled advertisement, Greene wasted little time reaching out to inquire about the building, which he said was already on his radar. When the two men began discussing the building’s future, they agreed on a shared vision.

Although Loflin has had inquiries about selling the building before, he said that he was still looking for the right fit. He thinks he’s found that in Greene.

One of Loflin’s stipulations for selling the building is that The Thread Shed will continue to call the first floor home for the foreseeable future.

“They’re going to develop the building and lease (part of) it back to us. We aren’t leaving,” Loflin said. “It’s a win-win situation. It’s really a dream team with who the Greenes have and it’s just a nice situation.”

As for the two floors above it, they will be turned into eight “premium” apartments. Those units, Greene said, will be constructed in a way that capitalizes on the building’s natural, historic advantages.

“We are going to try to be premium and top end,” Greene said. “If you see the building and get a chance to look out the upstairs windows and also look at the wood detailing and all the plaster and everything else, it’s going to be a beautiful building. I expect we’ll be one of the premier properties.”

The Bogle Architecture firm and Alfred C. Wilson and Co. will be involved in the development process. Greene also plans on seeking a historic tax credit through the state and said that “a lot of the interior beauty will be preserved.” That interior beauty includes high wooden archways, plaster walls and spacious, ornate doorways.

Plenty of work will need to be done to install eight apartments in the space, but it helps that the inside of the building looks pretty good for being over 100 years old.

“The building is in great shape,” Loflin said. “The building has never been brought up to date as far as someone coming in and remodeling it. It still looks exactly like it did in 1898 and that is a big plus.”

Not much will change on the Bell Block Building’s outside, since the structure is still under a preservation covenant with the Historic Salisbury Foundation.

“The covenant requires us to maintain the facade, color and look of the building and we definitely want to do that,” Greene said.

The purchase of the building comes with several coveted parking spots that will be available to residents, Greene said.

Construction on the apartments likely won’t start until the late spring or early summer, Greene said, and the project won’t be completed until 2022. While the project is still “on the front end,” Greene said that he is excited about the opportunity to produce something “transformative” in the downtown area.

Greene is no stranger to investing in downtown Salisbury. He and his wife Cora own the building that houses South Main Book Co. at 110 S. Main St. They operated the store themselves until 2016, when they sold it to Wendy Alexander-Persse. Greene also oversaw the construction of the Lee Street theatre building that opened in 2013.

Greene said that he thinks that Salisbury is poised for growth and he wants to continue to be a part of it. The downtown area, Greene said, already boasts restaurants and retail, but needs more residences. Those residences could draw young adults back to downtown Salisbury, Greene said.

“Right now, if you look at the next five years, the one thing we’re missing that can transform Salisbury is downtown living,” Greene said. “The residential units, the ones I’m proposing and some others that will come on line here soon, I think our downtown in the next five years will be a very different place.”