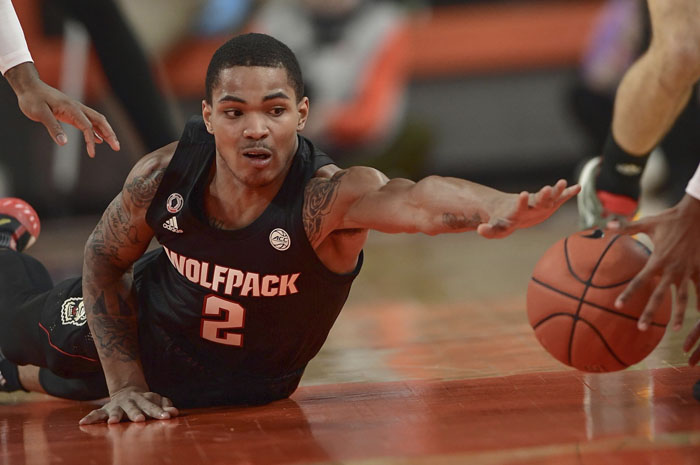 CLEMSON, S.C. — Clemson coach Brad Brownell wasn’t sure what he was watching in the first half as the 19th-ranked Tigers looked destined for another quick fall from the national rankings.

Then Aamir Simms hit a go-ahead basket for a second straight game and Clemson rallied from nine points down in the second half to beat North Carolina State 74-70 in overtime Tuesday night.

“Thankfully, our guys woke up,” Brownell said, “and responded the way good teams do.”

Maybe it’s time to see how good Clemson (9-1, 3-1 Atlantic Coast Conference) can be in a power league where none of the usual powers have yet emerged.

Nick Honor, a high-scoring Fordham transfer, had 21 points off five 3-pointers, including one that tied things at 62 in the final minute of regulation.

Clemson, tied with Virginia Tech in the rankings at No. 19, lives on its defense and entered as the ACC leader (and third nationally) in fewest points allowed. But the Wolfpack (6-2, 2-1 Atlantic Coast Conference) hit 15 of 27 shots in the opening half to lead 39-32 at the break.

They extended it to 41-32 on Manny Bates’ bucket with about 18 minutes remaining as Clemson struggled to score.

But Honor found his touch with five straight points to draw Clemson within 42-39. The Tigers were still behind 59-53 with less than five minutes left before tying things on Honor’s final 3 with 38.2 seconds to play.

In overtime, North Carolina State grabbed the lead a final time on DJ Funderburk’s 3-pointer with 3:12 to go.

That’s when Simms, a senior, got the ball down low for a basket to put Clemson ahead for good.

Simms, just 3-of-11 shooting for eight points in the game, added another bucket before Honor sliced through the lane for a layup that gave the Tigers a 72-68 lead.

Devon Daniels drew the Wolfpack within two points with a pair of free throws. But Clemson put things away on freshman PJ Hall’s inside shot that bounced off the rim before falling through with 10.8 seconds left.

Funderburk finished with 20 points while Daniels had 18 points and 10 rebounds for North Carolina State, which was looking to upset its second ranked team in three games after toppling then-17th-ranked North Carolina 79-76 on Dec. 22. North Carolina State had little difficulty penetrating Clemson’s normally strong defense — the Tigers lead the ACC with only 56.2 points allowed per game this season — and shot 56% in the opening half including six 3-pointers.

That didn’t continue in the second half.

North Carolina State coach Kevin Keatts said his team showed composure down the stretch in its previous two victories over the Tar Heels and Boston College. “Tonight, I thought we fell apart at the end,” he said.

Clemson now faces another test — trying to win two straight at North Carolina. The Tigers broke an 0-for-59 run at Chapel Hill last January with a 79-76 victory. Clemson heads back there Saturday with a chance for a streak of its own.

The Atlantic Coast Conference has postponed two women’s basketball games this week for third-ranked North Carolina State after a positive COVID-19 test, quarantining and contact tracing within the Wolfpack program.

Instead, No. 2 Louisville will visit Virginia Tech on Thursday while Boston College will visit Wake Forest on Sunday.

On the men’s side, Georgia Tech shut down all basketball activities and postponed tonight’s game at Notre Dame because of COVID-19 protocols. No date has been set to make up the game.