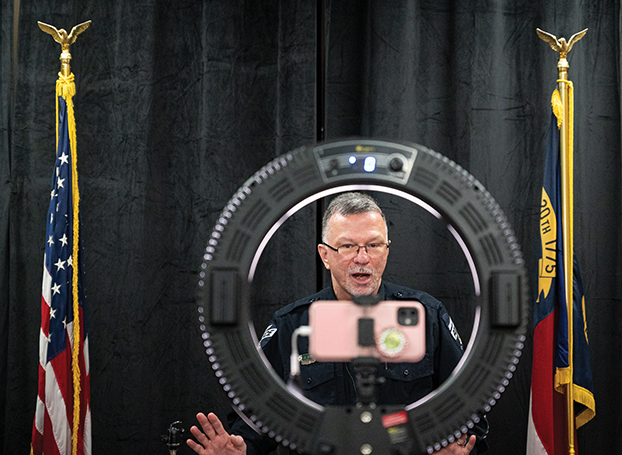 Josh Bergeron / Salisbury Post - Police Chief Jerry Stokes speaks during a live-streamed news conference Friday at the Salisbury Police Department. Stokes asked for the public’s help in providing tips about the murders of a mother and son on Lincolnton Road.

SALISBURY — Police Chief Jerry Stokes on Wednesday appealed to the public for help solving a murder case that claimed the life of a mother and her son on Lincolnton Road in October.

During a news conference live-streamed online, Stokes asked for the public to offer tips in the deaths of Debra Greene Brumley, 61, and her 38-year-old son Jonathan Lee Brumley.  Police found the pair dead Oct. 24 after they sustained multiple stab wounds inside the home.

They were last seen alive Oct. 22 at 6 p.m. and were the only residents of the home at the time of their death, Stokes said.

“I’m joining you today to ask for your help to plea for assistance in a recent case our detectives are working,” Stokes said. “Our hope is that this will resonate with someone who will come forward with information.”

He said that any tip helps, including if people saw something suspicious occurring on Lincolnton Road. The Brumley home was 1012 Lincolnton Road — near Millford Hills Road and Elm Street.

Sgt. Corey Brooks said police officers found the rear door of the home open. Stokes said it did not appear that there was a robbery or burglary that caused the deaths.

“If anyone has any information, no matter how minor you may feel it is, please reach out to our detectives so that they can bring closure to this grieving family,” he said.

Joining Stokes for the news conference was Debbie Reynolds, who said that his killing was a senseless crime. Four children lost a father and another four people lost a grandmother, Reynolds said.

“I’m just asking that somebody could please help. It would be greatly appreciated so that we can bring these people to justice,” she said.

Reynolds and other family members present for the news conference recalled Jonathan as a man who had a smile you couldn’t miss and who had a witty personality. He liked music and gaming. In particular, he liked the games Call of Duty and PlayerUnknown’s Battlegrounds, or PUGB. He enjoyed riding his dirt bike when he was younger.

He grew up in the Salisbury area and worked at Tuscarora Yarns for 14 years before it closed.

People who want to provide information about the murders can do so by contacting the detective handling the case at 704-216-2710, emailing investigations at salisburync.gov, through Salisbury-Rowan Crimestoppers at 1-866-639-5245 or tips.salisburyrowancrimestoppers.org.

“Please, I implore you, for this family, to come forward and provide information,” Stokes said. “No matter how small you think that information is, it can be very helpful in moving the case forward and bringing resolution to the family and to this community.”